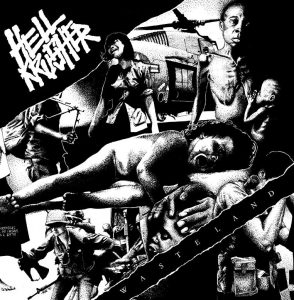 This is Hellkrusher’s 1990 album, given the usual deluxe Boss Tuneage reissue treatment with extensive liner notes and a tasty limited coloured vinyl version. Hellkrusher was formed by ex members of Energetic Krusher and Hellbastard and were/ are one of many great punk-hardcore-metal bands to come out of the north-east of England. I am more familiar with later Hellkrusher releases, and this record is an altogether different beast. When I saw the band live, I picked up some of their releases and the likes of Dying For Who or Doomsday Hour are a proper d-beat attack, with the metal touches kept to a minimum. Wasteland however belongs to a slightly different era. Imagine a time when the likes of Onslaught or Sacrilege, or indeed Energetic Krusher and Hellbastard were fusing metal and punk to create a vicious assault on the senses – well this release treads that territory. Thrash beats and shredding guitars form the core elements of the sound, with the barked vocals bringing this back into the punk/ hardcore realm. Bands and albums like this don’t give a fuck about labels or genres and with a desire to pigeonhole and categorise everything and anything, that type of approach is as refreshing today as it was well over 25 years ago when this beast was first unleashed. Tom Chapman