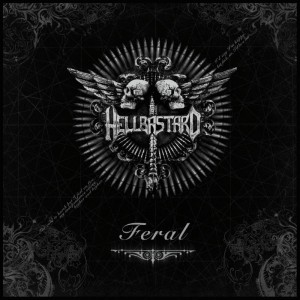 Think you know HELLBASTARD? You know nothing, as Feral has just rewritten the band in vivid shades of scarlet and gold. The tranquil intro piece, “In Praise Of Bast,” featuring the keyboard skills of Andy “A-. Droid” Wiggins (ex-Amebix), lulls the listener into a deliciously false sense of security, because seconds after its final note fades into memory, the album’s title track hurtles in with all the subtlety of a muddy jack boot to the head, HELLBASTARD‘s patented metallic riffage in full effect, Scruff howling, “My father was a wolf… my mother was a witch…!”

It becomes immediately apparent that this is unlike any other modern crossover album. This is primal, back-to-nature shit; a tsunami of raw emotion made sound that demands everything of the listener, no half measures. Not ever. You have to give yourself to the flow completely, or not at all, but the reward for such fearless trust in others is great indeed. An adrenaline shot of pure punk energy, for starters, all filtered through with some of thrash metal’s intricacies – but thankfully none of its overblown ego. And there is melody to be had here too, but you have to dig deep, claw through the wreckage and get your hands bloodied; subtle harmonies in the guitar interplays and peaceful interludes where you can rest a while between the harrowing heaviness of most of the material. Because honesty is always harrowing, isn’t it? And this is so honest, so utterly uncompromising in its pure existentialism, it will shake you to your core. As the album title suggests, this is a force of nature that refuses to be tamed, and will sweep everything before it asunder, rending it apart with its violent rhythmic contortions. A social hand grenade jammed in your teeth, literally blowing your skull apart with endless possibilities.

As well as A. Droid’s tinkering of the ivories, HELLBASTARD‘s Feral also includes guest appearances from Rob “The Baron” Miller (also ex-Amebix… indeed, the love of all things Amebix permeates every note and beat of this album) on “Wychcraft” and Mr. Heavy Metal himself, Andy Sneap (ex-Sabbat/Hell) on “And The Point Of Your Being Is….?” But Feral is not about individual performances, or indeed individual songs. It’s about reconnecting with that vital spark in your soul that has been dulled by the technological trappings of modern society. It’s a journey back to the earth, back to yourself, a metallic liturgy to personal freedom and self-expression, a call to the wild that cannot be ignored. Immerse yourself in the chaos and be reborn. — Ian Glasper/Terrorizer

Check out the Feral track teaser along with the official video for “We Are Coven” currently streaming at Decibel at THIS LOCATION.

Feral Track Listing:
1. In Praise Of Bast – Feral (featuring Andy “A. Droid” Wiggins)
2. Outsider Of The Year
3. We Are Coven
A. …For All Crippled Woods
B. …I Spit You Poison
C….Let Them Blast Their Brains
4. Shame On Us
5. And The Point Of Your Being Is…? (featuring Andy Sneap)
6. Wychcraft (featuring Rob “The Barron” Miller)
7. Social Hand Grenade
8. 4-Paws
9. Engineering Human Consciousness… II
10. All Our Sorrows

Formed in 1985 in the North East of England in the midst of Thatcherism, HELLBASTARD set out to play what they wanted to listen to themselves…. too “metal” for the punks and too “punk” for the metallers the band went on hiatus in 1992 before officially reuniting in 2008 and continue to bring a relevant lyric and sound to counteract against, mediocre sub-standard radio friendly, safety-rock.

Feral was tracked at the prestigious Hellfire Recording Studios (Slayer, Motörhead, Orange Goblin, Napalm Death etc.) in Derbyshire, engineered, recorded, produced and mixed by Ajeet Gill (Warlock UK, Slab, I Am Colossus, etc) and will be officially unleashed worldwide on July 17th 2015 on CD and digitally via PATAC Records with exclusive distribution by Independent Label Distribution. The first CD pressing will include a bonus track (not available on digital download or the upcoming 2016 vinyl edition) as well as an eight-page booklet and embossed digipack packaging.