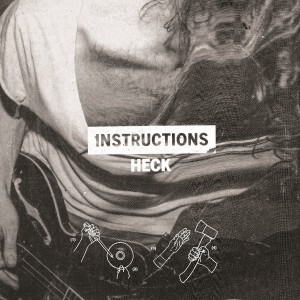 As a longtime fan, I was prepared for an assault on my ears upon hitting play. Looking at the track listing, some of the songs were immediately recognizable because I have heard/seen them on YouTube and I expected all hell to break loose. Heck (formerly Baby Godzilla) has a reputation, a damn good one, so I fastened my seatbelt, inserted my earbuds and you know what? I wasn’t blown away. No. Instead, I am awed, stunned, then – as expected – curb-stomped. This is a happy musical place for me. I stop the track to catch my breath, wipe off my sweaty palms and I’m grinning from ear to ear like a damn Cheshire Cat.

I expected the manic tempos, the shrieks from Matt. Those things are typical in Heck tunes. What I wasn’t prepared for was track three, A Great Idea Bastardized, a revamped version of one of the songs that made me pledge my undying devotion to them. They’ve made it better, much better. It’s scary, it has bigger teeth and it mauls you like a starving animal.

As for the Great Hardcore Swindle: for me, it is one of the single best videos ever made. Then there’s Don’t Touch that Dial; both songs hit a nerve.  The former is about attitudes and “selling out” in hardcore, and the latter – bleak and utterly visceral, is disturbing and full of tension. Then, with the very last track The Old Lady Decently Buried Although Amongst Those Left Are You, comes the unexpected triumph of a song that blew me away with its musicality and a depth I’d yet to see, or hear, from them. I can hear blues, punk, stoner and some very technical riffage. I knew they were capable of doing it, but they still tore my earbuds a new asshole and made me shiver like a damp child left outside during a blizzard.

Despite being a fan, I actually came to do this review thinking a full length would suck because the guys had finally gone bigtime, and with a full length album, there was no way, in my mind, they could sustain that kind of brilliance. I am happily proved wrong. If you’ve never heard of Heck, this is the album to draw your pentagram with and vow eternal devotion to them. Lucky Diamond