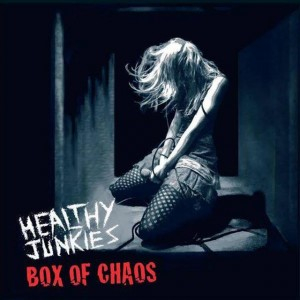 Here we have the third album from London based punk rock’n’roll troubadours Healthy Junkies. With a sound based around the core duo of vocalist Nina Courson and guitarist Phil Honey Jones, this new release offers us the latest peek into the seductive world of Healthy Junkies. These are tunes designed to be played loud and proud in a dark and sleazy Soho sweatbox and enjoyed until the early hours. Picking up on elements of the early New York and UK punk scenes, notably Blondie or Penetration, and mashing that up with the trash glam sounds of The Wildhearts or The Quireboys, the Healthy Junkies take a variety of influences and make a sound that is their own. Their trademark is Nina’s sultry melodic vocals that have a slight hint of a French accent, but singing alone does not suffice when making a great set of songs, and fortunately the music is also catchy and well written. Song-titles such as “Nice n Sleazy” and “Rebellion” immediately suggest to me that these junkies are happy to identify themselves with the punk scene, but this album, imbued as it is with a healthy portion of sleaze, goes way beyond those boundaries and should appeal to all fans of rock music. Tom Chapman