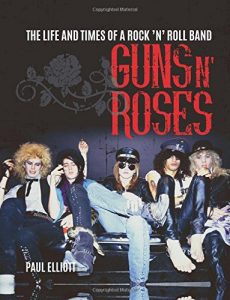 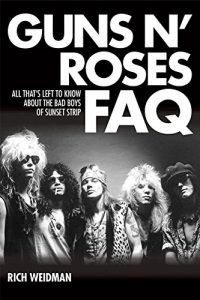 I guess it’s no surprise to see a plethora of books about the ‘Most Dangerous band in the World’ drop this year. It is after all the 30th anniversary of their visceral yet still hugely popular debut album ‘Appetite for Destruction’, and Weidman and Elliott provide two very different literary approaches to the band.

While both books pretty cover the bands entire career, Weidman’s book is part of a wider series of FAQs which deal very much in a basic ‘fact after fact after fact’ style of writing which never really captures the spirit of the subject, but does through up some interesting and little known facts about GNR, along with some more well-known bits of trivia such as the origins of Axl Rose’s name…  Pictorially it’s a little thin on the ground with most of the pics being from the author’s collection or stock Wikipedia type shots. There’s also a lot of fairly pointless non-GNR info such as lists of other bands that played the same LA venues as GNR, which as a fan of some of those bands I found interesting, but which your average GNR fan might not necessarily find particularly relevant.

Coming from a more established background in music writing (Sounds, Kerrang, Q, Metal Hammer Etc.) Elliott’s offering is a more structured, detailed and well written affair featuring a cornucopia of GNR pics (both professional and candid), an abundance of quotes from the band themselves and all the salient recording facts from the bands official releases. It’s a more readable tomb than Weidman’s ‘FAQ’ and definitely gets under the skin of the band, particularly concerning the well-publicised drug induced splits and the once perceived ‘Not In This Lifetime’ reformation; however the ‘FAQ’ may offer long term fans those pointless titbits of trivia that diehard fans love to throw about in the pub, or if you are under 40 – on Social Media. Ian Pickens