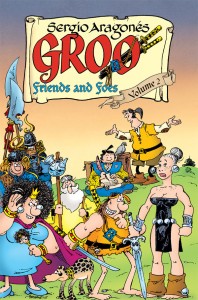 When we last left Groo he’d helped save the kingdom.

What did happen was destruction on a massive scale and in Friends and Foes Volume 2 this holds true once again.

This time, Groo’s sister Grooella ends up losing her castle due to her hatred of her brother causing her to lose focus while she’s trying to outsmart a rival king. Sage reappears to help a town with a bridge problem only to find out that sending Groo away might not have been his brightest idea. Groo then runs into his lost love (for him at least), Chakaal, who is also having kingdom problems and uses Groo to help her retake the throne she lost. And Weaver and Scribe return, with Weaver thinking that Groo will help him solve the problems he is having at his new job, only to find out, much to his dismay, that people do the strangest things when Groo is around. Oh, and Kayli? Well, along with her pet dragon, she’s still searching for her missing father.

Aragones once again sets his human wrecking ball on a path beset by the debris his creation leaves in his wake. While Groo isn’t the smartest person alive, he somehow still out thinks those that are far smarter than him through force of his sheer stupidity, which is part of the fun that is Groo. Agarones’s art is still just as detailed and his style unique, both of which are given centre stage in the incredible double page spreads that always appear in every chapter.  But for me, it’s what he plans to do with Kayli that’s the most intriguing part of the story and how she’s going to fit into the overall narrative. So for those that want something that isn’t serious, but is also compelling (what is Groo going to destroy or ruin next?) and thoroughly entertaining, take my advice. You really can’t go wrong with Groo. Jason Bonton