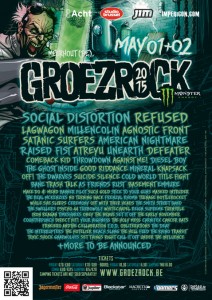 Here are some more new names who will be playing your favorite punkrock festival in just four months.

There won’t be any blurred lines from Swedish hardcore powerhouse RAISED FIST, though. Yes, they’re back after about 5 years of silence. Their new album “From The North” dropped earlier this month and it’s simply what we have gotten to know and love them for: awesome, straightforward, heavy hardcore punk. They just finished recording a video for the song “Flow”, and they want YOU to be the first to see it! Isn’t that sweet? Here’s what vocalist Alexander has to say about it:

“Its more than 10 years since we played Groezrock. Still we have so many clear memories from that insane show! This spring we finally return! With a new album, and a band on a whole new level! We are glad to announce our new video in co-lab with Groezrock and Epitaph.

The video illustrates what we feel like music-wise and mentally after being away for almost 6 years, surrounded by people wanting to put a lit on our outflow, and hinder the circulation. Instead of making this Hollywood polished “expendables” action video like “Friends & Traitors”, we wanted a gritty, nasty, disturbing look in the style of the movie “Pusher”. Everything to accompany the rough sound and feeling of FROM THE NORTH.

We recorded this in a freezing hangar. Almost no clothes. We got wet, we got spit on, we got hit for real and it was just the worst recording ever comfortable-wise. Enjoy the result!”

The You Tube link for Raised Fist – ‘Flow’:

Thank you, Alexander. Now, on with the show!

Come to think of it, describing KNAPSACK as new might be stretching the truth a little. After breaking up in 2000, the band is now back and it will be a pleasure to watch them blur the lines between emo and indie at Groezrock.

Another band that has been around the block, gotten lost and then found its way back to the stage is DIESEL BOY. According to the band they are ‘thrilled to have been asked to perform at the 2015 Groezrock Festival. Having played some of the world’s finest cities — New York, London, Sydney — we couldn’t be happier to add Meerhout to that list. In preparation for our first Belgian show in 15 years, we will view the complete Jean-Claude Van Damme filmography (including “The Shepherd: Border Patrol”) and subsist entirely on a diet of stoofkarbonnaden and Duvel until we appear at the festival on May 2’.

You almost fooled us by leaving a letter out of your name but we figured you out, Frank. My Chemical Romance called it a day in 2013, but rhythm guitarist Frank Iero sure wasn’t done writing music. He recorded an album pretty much on his own in 2014, recruited a touring band and will be coming over to Europe. Yup, FRANK IERO AND THE CELLABRATION will be playing at Groezrock.

From Cellabrations to OBLITERATIONS. Featuring members of Black Mountain, Pink Mountaintops and Saviours, the band already knows how to come up with some heavy riffing. Drop them in Dave Grohl’s studio, put Chris Owens (Young Widows, Coliseum) and Kurt Ballou (Converge, High on Fire) behind the mixing table and you can bet your a** that you’ll be blown away by a heavy dose of insanely intense hardcore punk,

If you don’t like it so loud and aggressive, you can just, ehm, f*ck off and die. Really, that’s what F.O.D. stands for. These local heroes have been sweeping girls off their feet with sugar sweet harmonies and super fun punk rock for quite a while now. And they’re more than happy to share their “Tricks of the Trade” with you.

Over to the Macbeth Stage then… they have announced three more names as well, starting off with THE DEAF, a Dutch band that likes 60ies garage and rock ‘n roll with Spike (Di-rect) on vocals. Also from The Netherlands is CALL IT OFF, a pop-punk band that has been listening to a fair amount of Green Day. UK’s UNDER THE INFLUENCE will be playing the Macbeth stage as well. Under their influences they list Dr Dre, Wu-Tang Clan and Snoop Dogg and sound not unlike other UK acts like Enter Shikari and TRC.

We have 20 more bands to announce so keep tuning in for more news!