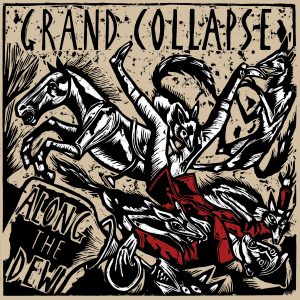 You know those bands that you hear all of the clued-up scene folks, the “people” in the know, whispering about? The ones that the HC intelligentsia seemingly don’t want any of the average, everyday working Hardcore stiffs to know about? Yeah, Grand Collapse are one of those bands. One of the closely guarded secrets that the Underground has kept clutched tightly to its collective bosom, far away from the prying eyes of the unwashed, spiky haired masses. And they (the collective punk rock they that is) were probably right to do so because Grand Collapse are an incredible fusion of raw energy, condensed fury and songs that fill every atom of your being and then explode in whirling maelstrom of barely contained anger and aggression, and damn, those songs…They’re some of the catchiest, most terrifyingly instant tunes you’re likely to hear this side of the next Bad Religion record.  That’s not to say that Grand Collapse sound anything like Bad Religion, they don’t. Come to think of it, they don’t really sound like anyone else out there – maybe a more melody driven Tragedy or His Hero Is Gone?, they just sound like… Well, they sound like Grand Collapse.  They are the oncoming storm, the end of all things and the band that will still be playing when the Earth cracks apart, raising their collective middle finger to the vastness of Space and doing their own thing right up until the moment of absolute oblivion. If you’ve ever wondered what incredible sounds like, then wonder no more. It sounds like Grand Collapse… Tim Cundle