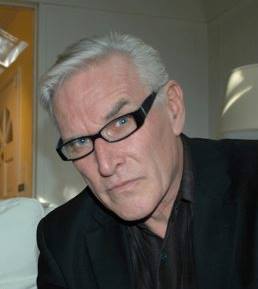 Martin Olson may be best known for his work as a writer for Disney’s Phineas and Ferb and for adding his voice to animated series Adventure Time as Hunson Abadeer, “The Lord of Evil.” He is also a playwright, composer, TV producer and, most likely, a Calvin Klein model as well. This guy’s resume includes work with Bobcat Goldthwait, Rob Schneider, Kevin Nealon, Penn & Teller, Rodney Dangerfield and many more. Most recently he has penned the book Encyclopaedia of Hell  which is a guide for Satan’s demons to follow when they conquer Earth. One look at the list of names he’s worked with in the past will tell you that this book is, in fact, a hilarious read for those with a darker side. During the course of this interview I learned that Martin Olson is funny, intelligent and refuses to be bullied into answering a question that’s so stupid my mother is ashamed of me for daring to include it. When I grow up, this is the guy I want to be.

MM:  I have to be honest, I had never heard of you before a friend of mine recommended Encyclopaedia of Hell to me. What series of events led to your current place in existence?

Martin Olson: I grew up in a happy family in poor section of Boston. I come from a long line of Swedish house painters and accordionists. My grandfather went insane from inhaling paint fumes and my great uncle was arrested for exposing himself at a Myron Floren polka concert.

MM:  While I was soliciting a review copy of Encyclopaedia… you mentioned your work with the Adventure Time cartoon show. What is your full involvement with Jake and Finn?

Martin: Pendleton Ward, the modest genius who created the entire Adventure Time world out of the fabric of his mind, hired my daughter Olivia to play Marceline on his show. Soon after he asked me to play her father on the show. He also liked my book Encyclopaedia of Hell and graciously asked me to write the encyclopedia for his series in a similar style. I am indebted to him for the wonderful creative fun I’ve had working on a television show with my daughter. Thank you, Pen.

MM: Unfortunately I haven’t had a chance to read Encyclopaedia of Hell… yet. What can I expect?

Martin: I’ll take a breath. Encyclopaedia of Hell, published by Adam Parfrey’s Feral House, is about Hell being overcrowded, thus Satan launches an attack on earth for the land mass, and to use humans as foodstuffs for his invading armies. During the invasion Satan realizes he’s a created being and goes to find God to kill him. I’m writing the sequel now called Encyclopaedia of Hell 2: Satan’s Secret Library. The third and final, I think, will be called Encyclopaedia of Hell 3: The Secret of Nothing. The trilogy satirizes religious creation myths via the conceit of an anthropomorphic God and his evil anthropomorphic reflection, Satan, both of whom are well-meaning dunces.

The first book shows the overthrow of earth, the second the overthrow of heaven and the third reveals the surprisingly unsophisticated secrets underlying the structure all of creation, showing it to be a rather poorly constructed affair, barely holding together without massive amounts of illusory stitching on the sides to keep it from falling apart. I’ve said too much. 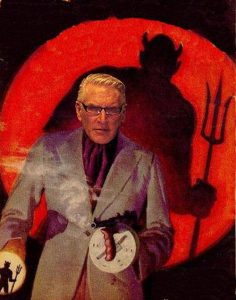 MM:  Will I be struck down by a divine hand for daring to interview you while I know nearly nothing about you and your work or will I be celebrated for my bravado by the fans of Martin Olson for exposing the truth behind your greatness?

Martin:  Since that was vague, I’ll answer another random question. I worked for my old friends Dan Povenmire and Swampy Marsh at The Walt Disney Company for the past seven years writing the animated series Phineas and Ferb. Amazing creative fun and the company is a dream come true to work for. However, on the sixth day of the sixth month of my sixth year writing for Disney, I was invited by executives to a secret initiation ceremony where Walt’s frozen brain was thawed out and implanted into a super-computer. The computer analyzed the company data and immediately ordered the canceling of all Disney Channel sitcoms and that bonuses be given to show creators with successful shows to foster good will. The executives were forced to destroy the computer for the good of the company and for the good of society at large.

MM: What’s one thing that your friends, family and fans may consider TMI (Too Much Information)?

Martin: I remember when I first realized I was not uniquely funny. My mother just had open heart surgery when I told her I sold a comedy screenplay to DreamWorks.  Soon after, on her deathbed, she said I have something to show you. She pulled out a shirt box with two old notebooks inside. On the covers, in crude handwriting, it said “Joke Book One and Joke Book Two by Martin Olson”. I’d forgotten all about them. I wrote them when I was eight and in her mind I was destined to be a comedy writer. I thumbed through the books and couldn’t break the truth to her that they were execrable. Later in life, I vowed to to duck-tape them to my chest and hang myself from the Hollywood sign.

MM:  Are you a music fan? What is your preferred genre/favorite band? 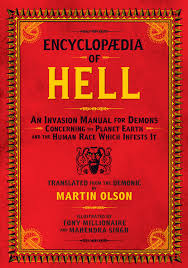 MM: Your official bio refers to you as the ‘late’ Martin Olson. How long have you been dead and do you have any intention of returning to the land of the living?

Martin: I wrote a bunch of fake bios on the web claiming that I died in various ways and, like Twain, all slight exaggerations.

MM: What mysterious force keeps you writing and creating even though you’ve met your untimely demise?

Martin: I wrote a song for Disney that deals with that question. It’s called ‘SOME MYSTERIOUS FORCE’. Google or YouTube under “Phineas and Ferb.”

MM: Supposing you don’t decide to go into that heavenly light right now, what new things can your lamenting fans expect from you in the upcoming year?

Martin: Thanks, Jim. As for upcoming things, one thing I can hang my hat on is that I will soon be dead and forgotten, as will all my books, songs, TV shows, cartoons and resumes. So since this doesn’t matter, I’ll end with some advice for writers out there: Write for yourself and not for an audience or for executives, try your best to be respectful to everybody, and on a personal note, if you strangle a nurse after a party, make sure you find a ravine with off-road access to dump the carcass.