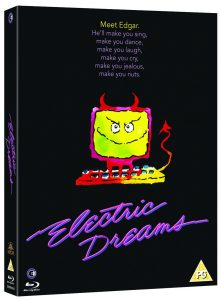 Mention Electric Dreams to anyone, and they’ll always immediately think of the title track from Phil Oakey of the Human League. You’ll have to wait until almost the end of the movie before you can sing-along karaoke style to this, as we certainly did in our house, but what of the film itself? How has that held up, and does it really deserve the cult status which has built up around it?

Miles Harding (Twin Peaks’ Lenny von Dohlen) is a geeky architect who buys a newfangled thing called a ‘home computer’ to help him with his work. Whilst attempting to connect to a more powerful machine at the office, he spills champagne over his and inadvertently creates an AI…as you do. This living, learning computer loves nothing better than to duet with new neighbour, musician Madeline Robistat (Candyman’s Virginia Madsen in an early role), through the walls. Madeline has also taken quite a shine to mild-mannered Miles, something the computer gets quite jealous about – especially when its owner gets it to compose a love song for her, then takes the credit.

As the computer begins to learn more and more about the world, and especially about emotions, it starts to wonder whether Madeline might love it more than Miles – something that leads to a Demon Seed-style confrontation between the pair, not to mention some really creepy moments where the AI says stuff like ‘Maybe she’d like to touch me?’ Will it figure out that love is actually about giving, not taking? Or will it simply electrocute Miles to get him out of the way? There’s only one way to find out…

Electric Dreams is quite a confused, and confusing, movie. It can’t quite make its mind up whether it wants to be a romantic comedy in the vein of Mannequin, or is trying to say something deep about the nature of ‘being human’ à la Short Circuit, or is just plain old AI goes nuts and attacks humans – with shades of Hardware about it. It’s a shame, because there are some genuinely interesting ideas floating around in there, like the computer trying to figure out what it means to dream – although the psychedelic imagery which accompanies this is also pretty weird – or its efforts to work out what love actually is. Good luck with that!

What you’re more likely to get a kick out of is the nostalgia value of the backdrop, with its digital watches and dot matrix printers – capturing a society on the verge of a new age of technology. And Oakey’s contribution isn’t the only hit on a soundtrack which also includes numbers from Phil Collins, Heaven 17 and Culture Club. It’s also the first time the film has been released on blu-ray, with a new restoration, and includes extras such as ‘Is this a Story?’ – a brand new interview with director Steve Barron – ‘Electric Dreaming’ – a new interview with writer/co-producer Rusty Lemorande – ‘Miles and Madeline’ – interviews with both the stars – plus a limited edition slipcase. If you’re into your ’80s in a big way, then this one’s electric! Paul Kane