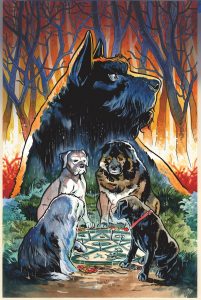 Dark Horse Comics is proud to welcome fans back to Burden Hill as the one and only Evan Dorkin (Blackwood, Milk and Cheese, The Eltingville Club, Dork) joins forces with artist Benjamin Dewey (The Autumnlands) and letterer Nate Piekos for a thrilling new series, Beasts of Burden: Wise Dogs and Eldritch Men. Co-created by Dorkin and Jill Thompson, Beasts of Burden has been a staple at Dark Horse since it debuted in 2009 and we are thrilled to bring readers a new story starring Beasts of Burden’s Wise Dogs.

Beasts of Burden: Wise Dogs and Eldritch Men follows the heroic pack of canines known as the Wise Dogs as they take on a series of new horrors and find a link among a variety of seemingly unrelated occult disturbances plaguing Burden Hill and the surrounding areas. Their discovery leads them to mountain village inhabited by a survivalist witch-cult who have uncovered the existence of a “Blood Lure” attracting occult forces, creatures, and many more terrors to Burden Hill!

Beasts of Burden: Wise Dogs and Eldritch Men #1 (of 4) goes on sale August 22, 2018, and is available for preorder at your local comic shop. Issue #1 also offers a variant cover by Rafael Albuquerque.