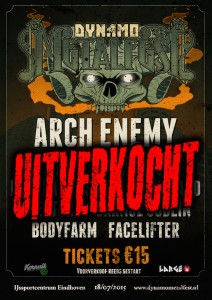 The final ticket for the inaugural DYNAMO METAL FEST has now sold!

The festival – which takes place on Saturday, July 18 – is preparing to welcome 5000 visitors to the IJsspoertcentrum in Eindhoven. As well as the Dutch fans attending, metal fans from fifteen different nationalities, including visitors from neighbouring countries, and as far and wide as Australia, Canada and Chile, will be traveling to Eindhoven.

The festival is very pleased to announce that the first edition has already sold out; “Secretly, we hoped that this would happen, but we didn’t set up the festival expecting that it would,” said Paul van Berlo, co-organizer of DYNAMO METAL FEST. His colleague, Tjerk Maas adds: “We had assumed there was a demand for such a festival, but it’s great to see so many people buying tickets, proving we were right in assuming so. With almost 200 volunteers, without whom this would not be possible, we will make this a great party! “.