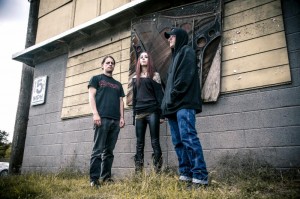 In just one week, the harrowing debut LP endeavor from iniquitous occult blues collective, DREADLORDS, will be released onto the population, in the form of Death Angel, while devotees can succumb to the official video and full stream of the album in advance.

Containing members of Panther Modern and T.O.M.B., and hailing from the Philadelphia and Upper Bucks County areas of Pennsylvania, DREADLORDS boasts a cruel brew of organic traditional blues and crushingly dark Americana, which is intermittently infused with the slight presence of psychedelic black metal and noise experimentation. On Death Angel, the somewhat elusive sect releases thirty-eight minutes of bizarre and unique blues-based odes to Lucifer in the same wayward path as their previously released recordings carried to more explorative depths of the darkest realms of blues-based rock and roll. Recorded during the Winter of January 2013 at Satan’s Palace Recording Studios, Cherry Hill, New Jersey, the album features Brian Zimmerman on banjo, Samantha Viola on drums, bells and ritual implements, and J. Gannon on vocals, with guest vocals on the title track by Susan Bones.

Cvlt Nation issued the official video for Death Angel’s second track, “Alone,” which was directed, filmed and edited by James P. Gannon. With the video premiere, the webzine issues, “Unhinged, Primitive, Rural, Mayhem, Magic, Conviction and Whiskey are some of the words that come to my mind as I listen to the new DREADLORDS album Death Angel. Over 11 tracks, this band shows the world how extreme music can be created with a twisted imagination and a banjo…DREADLORDS are like no other band I have ever heard, and to say that I’m excited about this album would be a gross understatement.”

View the “Alone” video now at THIS LOCATION.

Death Angel will now see release via Seattle-based Not Just Religious Music, formed by TJ Cowgill of King Dude and home to King Dude, Chelsea Wolfe, Bain Wolfkind and others. The album is out next Monday, December 8th, seeing a digital release as well as 12″ vinyl, the LP limited to 500 copies, with 200 on black and 300 on random colors, each including a download code. Place orders and stream the album in its entirety RIGHT HERE.

DREADLORDS will infiltrate the masses preaching these shadowy hymns of rebellion live in the months ahead; notifications on definite upcoming sermons will be proclaimed shortly.