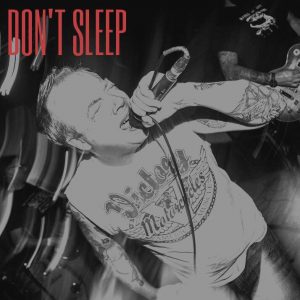 Okay, let’s imagine just for a second that Mr Dave Smalley comes along and tells you about an idea for a musical project. Someone with a rich history of bands such as DYS, Dag Nasty, All and Down By Law wants to join forces and work on something new. Well that was the task placed at the feet of the band now known as Don’t Sleep, and this one-sided 12″ record is the result. I am very glad to say that the band has not let the task overwhelm them, but has focused on writing a set of powerful, melodic hardcore anthems perfectly suited to Dave’s vocal style. It might have been too easy or obvious to simply copy any of the above bands but instead these guys (who have a decent pedigree of their own under their belts having played in bands such as Praise, Mindset, The Commercials or Junction – yes the old Art Monk Contruction band!) don’t seem to have been constrained by the job in hand. There are some old school hardcore tunes on here but the focus is more on mid-paced rocking melodic anthems with sweet guitar licks and drumming breaks by the bucket load. Of course the big selling point here is Dave Smalley himself and his vocal performance on here reminds me of early Down By Law. This may well be an excellent thing, but this record is in no way a one-trick pony instead having all the hallmarks of a modern hardcore diamond in the rough. The release itself is a real labour of love from the crew at Unity Worldwide, with the B-side of the vinyl featuring a cool etching and it can be pre-ordered here Tom Chapman