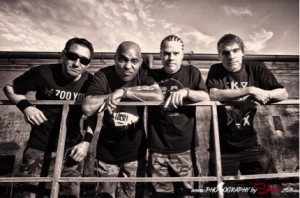 Formed in New Jersey from the ashes of Mucky Pup, DOG EAT DOG became one of the pioneers of rap-rock, being one of the first bands to fuse hardcore with rap in a way that would later become commonplace.

They released their debut full-length ‘All Boro Kings’ via Roadrunner in 1994. Packed full of good time party hits such as ‘No Fronts’, ‘If These Are Good Times’ and ‘Who’s The King’, it went on to sell over 600,000 records worldwide.

With huge support from MTV – including an appearance on the Beavis & Butthead show, where they were labeled as “a bunch of butt-munches” by the shows’ animated hosts – it was not long before DOG EAT DOG were filling huge theatres around the world, as well as sharing stages with the likes of Rage Against The Machine, Ozzy Osbourne, Kiss and Metallica.

Now, 25 years after their formation, DOG EAT DOG return to deliver the hits in an exclusive, intimate setting.

Catch them at The Underworld, Camden Sunday April 12th 2015