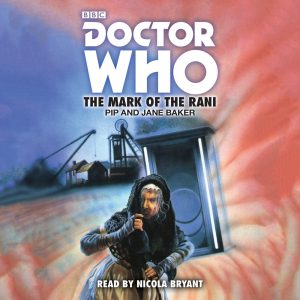 Pip and Jane Baker wrote good TV scripts. That needs to be said, because their reputation in the Doctor Who fandom is often unfairly besmirched. They took the science-heavy philosophy of earlier script editor Christopher H Bidmead, and then they did something quite remarkable with it, which Bidmead himself never knowingly mastered – they wrote engaging stories around the science.

But with the quality of their scripts acknowledged, let’s also admit that they loved to throw absurdly over-loquacious words and phrases into their scripts, which occasionally made the viewing audience rear back and think ‘Whhhha-?’

That tendency towards intellectual horse-whipping became even more pronounced when they took to novelizing their own stories. Plus, bless ’em, they could write good scripts, but novelists they were not. At least, not good ones – they jumped from head to head, they used connective ideas from scene to scene, and they anticipated truly, madly and freely – telling us, for instance that if a character hadn’t done what they did, it would have been the last thing they ever knew (Cue dramatic chords!).

The Mark of the Rani, then, is not a great book. It’s not even a particularly great novelization – the technique and the ‘Look, look, this is us being clever!’ tricks have a tendency to water down the enjoyment it’s capable of delivering. But it is a novelization of what is, beyond a shadow of doubt, their best Doctor Who script. The Mark of the Rani works in spite of itself at several points: Anyone who’s seen it on TV or DVD will surely remember the dodgy tree, and the equally immortal line ‘Peri! The tree won’t hurt you!’ And then there’s the almost mystifyingly meaningless Tyrannosaurus Rex foetuses, of course. Annnd the fact that being robbed of sleep wouldn’t necessarily make you change your mind about machinery – although just possibly Pip and Jane had had one too many printer jams during the writing process and decided that yes, actually it really would.

For all that, The Mark of the Rani is brilliant. Firstly of course, it’s brilliant because it introduces us to the Rani – a renegade Time Lord who’s not on some Doctor-destroying vendetta, and is able to tell the Master, who is, exactly how stupid he’s being. We love a new Time Lord, because it’s like, for instance, meeting a new element in Sapphire and Steel – there’s always an extra excitement about how they’re going to handle being a Time Lord. Friend or foe of our Doctor? Good or evil? Clever or incompetent? Meddling or obedient? We want to see as many ways of being Time Lords as there are, and in the Rani, Pip and Jane Baker, their work translated through the fantastic skills of Kate O’Mara, delivered us a doozy – so much so that even in 21st century Who, fans frequently still clamour for her return.

Then there’s the Master himself, swanning about the place with no real purpose but to act as the Rani’s whipping-boy, and yet, by the final act of the story, we see him improvising wildly and coming up with a plan to turn the Earth into a powerhouse in the cosmos (again, it doesn’t do to examine the plan too deeply, because we’re pretty sure the rest of the cosmos has railways and lightbulbs, but go with it). Anthony Ainley probably didn’t like how the Master was written in The Mark of the Rani, but frankly, that’s tough – it’s enormous fun to see him insulted at every turn by someone he respects, and then find ways and means to come out on top, if only anybody would listen to him.

As well as all of which, The Mark of the Rani is adventurous fun with geniuses, and for all the novelization is written in a style almost designed to make you pull your hair out, everything seems to hang together well enough to power you on to the end.

And then, in the audio version, there’s a stroke of stone cold genius.

Nicola Bryant’s best known as Peri, and here she slips into the American botanist’s character at the drop of an accent. Her own narrative voice is something considerably deeper and richer, and that too is used to great effect in The Mark of the Rani audiobook, giving context, setting scenes, making sense of the Bakers’ intentions through intonation. But it’s Bryant’s tireless work at populating the drama with a variety of characters that blows the doors off this release. Peri…does Geordie! And does it blindingly well, too – her George Stevenson, her ‘old crone Rani,’ her bluff but rational Lord Ravensworth, her ‘not-Luddites,’ including Jack Ward, and her tender Luke Ward all light up this audiobook. Her interpretation of Anthony Ainley’s Master is slower and more cat-like than the man himself, her Kate O’Mara’s never quite as arch as that particular force of nature, but she gives them consistent vocal characteristics here that sing you through the occasionally challenging structure of the novel. Bryant works her socks off, up and down the rage range, across the gender spectrum and the class system, even technically from species to species, and her narration’s full of listener-hooks and gusto, pulling you on and never ashamed to give it a bit of extra lather running up to a cliff-hanger.

The Mark of the Rani was one of the Sixth Doctor’s finest hours on TV, dodgy tree and all. It became something rather less wonderful in its novelization. Nicola Bryant though is a godsend to listeners of the audiobook version, restoring the joy, the fun, the sense of the Rani’s amorality and the pacing that made the TV version the pleasure that it was. Get this version for the Rani reveal, and for Bryant’s tireless determination to make the story live again in all its beats, its humanity and its peril. Tony Fyler