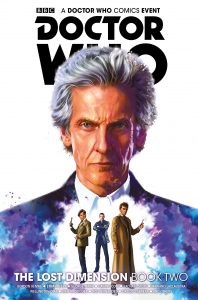 We talk about golden ages a lot in Doctor Who fandom. To some extent, the age at which we first become a fan of the show will always be a golden age, because it’s the age during which we first heard the whisper of possibility of wandering off into time and space with a funny, silly, kind, world-saving hero in a box of improbable wonder.

But beyond that, there’s a validity to our gold-tinted spectacles. Doctor Who as a show has had far more golden ages than any single TV show has any right to expect, and what makes those ages shine so brightly is the commitment by the people producing it to getting it right, even if they redefine what right means as they go. The ideas of heroes, humans and a moral fight against the bullies of the universe wherever they may be is a constant, but within that idea, if you want to make gold-standard Doctor Who, you can do anything you like, so long as you care.

In the years of New Who, and in particular the years since Titan Comics got the license to produce New Who comic-books, we’ve experienced riches like seldom before. This is, without a shadow of doubt, a real golden age of Doctor Who in comic-book format – each Doctor Titan takes on sings, feeling absolutely right within their period and delivering Who on a visually epic scale that only comic-books can do.

When you do multi-Doctor stories against that background, you have to turn it up to thirteen simply in order to justify doing it at all – your Doctors have to be right, that’s a given, but you also have to deliver a danger complex and appalling enough to warrant getting your chosen Doctors together, and you have to give your Doctors enough to do.

The Lost Dimension, Book One was positively epic, bringing in Doctor after Doctor, keeping their stories pretty tight and giving them all the mood of their particular era. It managed to give each of the New Who Doctors an enormous challenge of their own, threw in some lovely cameos from Classic Doctors, and one fairly major one from a non-Doctor, and established a pulse-pounding threat that really brought home the joy of the comic-book medium – free from TV budgets and the inconveniences of human mortality, it can tell the stories that might never be dared in other media.

Book Two by contrast fills in some of the answers behind a couple of plot-threads in the first book, and expands the explanation to more Doctor action, and a long cameo sub-story from another non-Doctor.

We kick off Book Two with the Fourth Doctor and the Second Romana, running into a universe gone fanboy-loopy, as three of early second-fiddle villains that nevertheless inspire affection among fans get to live out their universe-dominating fantasies and kick a bit of galactic ass. There’s a joy in seeing them all in comic-books, and especially in seeing them all together (at least one of them has learned a really neat new trick, so watch out for that). What’s more, they appear together for reasons that make good in-story sense. It’s fair to say that the artwork of the Fourth Doctor and the Second Romana is somewhat romanticised compared to that depicting the New Who Doctors, with the Fourth Doctor seeming younger than he ever was on screen, and certainly younger and sharper of cheekbone that he was by the time he was travelling with the Second Romana. Ignore that – imagine the Fourth Doctor’s last adventure saw him go the Mystical Manussan Mirror of Handsomeness or somesuch, and he’s still feeling the effects. The dynamic between the two Time Lords is faithfully reproduced, with Romana bamboozling the assembled forces of Intergalactic Gittery by pointing out that the Doctor’s not really that special when it comes to Time Lords, and the Doctor deploying, if not the Deadly Jelly Baby of Rassilon, then something that gives it a hearty hat-tip.

While the Fourth Doctor’s busy saving the universe through silliness, the non-Doctor cameo here by a Person of New Who Importance makes sense of something from Book One that we were certainly waiting to have unravelled for us. It’s perhaps the oddest fit in the overall story of the Lost Dimension, feeling very much like an adventure in a tangential reality. The adventure makes sense, and feels rendered in a different style to the Doctoring in this book, but there’s a chance that the longer it goes on – and it does, telling a whole adventure in its own right – readers who are still on the edge of their seats after the cliff-hanger of Book One might feel the urge to skip forward to the modern Doctor stories.

When we eventually get back to those stories though, there are more surprises, and the return of a comic-book companion that brightens up the page, as well as the kind of brain-twisting imagery regular readers will have come to expect of the Eleventh Doctor comic-books. There’s a meet-up between two seeming opposite Doctors by temperament, which works out really rather better than you’d imagine it would, and shows up the genius of the show, in that they’re less than five years apart and yet are completely different essences of the same character. And in terms of bringing the story to a satisfactory conclusion, there’s a story-thread which doffs its various hats to The Day of the Doctor, while sitting alongside it as a logical bookend in a way that’s rather wonderful, and compassionate, and hankie-worthy. And that’s the overall vibe with which you’re left after the universe has given us this bumper bag of sweeties, turned inside out and upside down and back to front and sideways – you’re left feeling wonderful, and like you’ve been on a sugary ride into the heart of budget-breaking, impossible-in-any-other-medium Doctor Who.

The writers, artists and colourists on this two-book treatfest have pooled their powers, to give us multi-Doctor Who like Letts, and Hinchcliffe, and Holmes, and Dicks would have made at the height of their powers if you’d given them the wizardry, the budget, and the best technicians in the game of 2018’s Hollywood. The Lost Dimension, Books One and Two together, epitomise the new golden age of Doctor Who in Titan Comics. Get Book Two, imagine the Fourth Doctor with sharp cheekbones and looking young, and go where the story wants to take you. You’ll be so much better for it when you’re done.   Tony Fyler