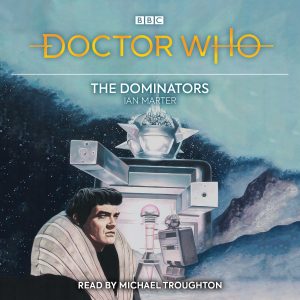 Ahh, The Dominators. For those of us of a certain age, The Dominators holds a special place in our Who-fan hearts, along, bizarrely, with The Krotons. They were among the stories chosen for a rare celebratory black and white repeat in the Eighties, and so, for some of us, The Dominators is one of the first times we actually got to experience Patrick Troughton’s Second Doctor.

So, score one for nostalgia.

What’s more, The Dominators of course was originally written by Mervyn Haisman and Henry Lincoln (under the pen name of Norman Ashby), and they were the people who brought us The Abominable Snowman and The Web Of Fear, so there’s some solid Troughton-writing pedigree there.

What’s even more, the Target novelisation was written by Ian ‘Harry Sullivan’ Marter, who had a distinctive, often highly evocative style, with which he frequently brought stories to very vivid life.

And if you want a kicker, the audiobook is read by Michael Troughton, who, like his brother David, has a distinct knack of imitating his father Patrick’s delivery.

So what could possibly go wrong?

Honestly, one or two important things.

Nostalgia is great in and of itself, but it does odd things to the memory. You begin to remember some things through rose-tinted glasses. The Dominators’ storyline of the ultra-passive Dulkians and how they cope with the invasion of aggressive bully-boys from outer space was an idea had a resonance on every playground in the country – the mean boys coming to basically steal the nice boys’ lunch money, push them over and…well, blow up their planet, but it’s a story that suffered somewhat by the fact that the Dominators land on an isolated island, on which the Dulkians don’t actually live, so to get any interaction between them, you have to endure a shuttle ride which eats up time while characters chew the scenery. It was a story also that suffered from budget issues, with the result that the Quarks, the robotic servants of the Dominators, by whose destructive power we’re told they’ve conquered ten galaxies, look utterly illogical, and like they’d only take one good shove to put out of action with no hope of righting themselves. There’s some evidence too that Haisman and Lincoln were not on their top form here – indeed, this was the last story they wrote for Doctor Who, and a whole episode was cut out of the story. It’s unfathomable with what they would have ultimately filled another 25 minutes, because as mentioned, The Dominators is a story that depends on busing the Dulkians in to be menaced, or on one important occasion, having the Dominators take a shuttle ride to shout at them where they live.

And, perhaps more than anything, the Dominators’ defeat is made a certainty not really by anything clever the Doctor or his companions do but by their own gullibility, sloppy methodology, and in the case of the Trainee Dominator, Probationer Toba, his anger management issues. The Dominators is a kind of science fiction version of a visit from your old school bullies.

The novelisation, to be fair to it, smooths out several of the rougher and more ludicrous edges of the story – the Quarks in particular are notably improved by Marter’s descriptions of their semi-humanoid giggles and speech patterns, making the somewhat ridiculous visual impact of their appearance on screen blur into intriguing acceptability, making you think ‘Ten galaxies, with these things? Yyyyeah ok, maybe.’ This is a thought that never, ever, ever occurs to anyone watching the Dominators on TV, so it’s another point in favour of experiencing it as an audiobook.

Here’s the rub though. While Michael Troughton does a good job of rendering his father’s Doctor, and also of his companions, Jamie and Zoe, there’s very little in his voice that reaches the levels of viciousness you need to be a Dominator, leaving you rather aware that with their entirely demented plan (stolen, incidentally, more or less wholesale from the Dalek Invasion of Earth, and later recycled almost wholesale again for a strand of Attack of the Cybermen), their gruff male power struggles (imagine going on holiday with the most petty driving instructor in the world and then add guns to get an idea of the dynamic), and their deeply unusual visual rendering, with enormous shoulder-pads dwarfing their heads so they looked – as Marter describes them more than once in the novelisation – like upturned turtles, the Dominators themselves, played by Ronald Allen and Kenneth Ives, are an absolutely vital part of keeping the viewer, the reader or the listener engaged throughout the run-time of the story, and if you fail to properly capture the oomph, the arrogant macho oomph of those characters, you invite the listener’s mind to wander through what is actually a rather pedestrian story.

In fairness to Troughton, there are a couple of key moments when he gets the gruffness and rage of the Dominators into his voice, which helps to get you through – in his rendering of Toba’s gleeful rages of destruction, he hits it squarely, and in potentially the most crucial scene of the story, when Dominator Rago schlepps over to address the Dulkian council, the arrogance and hubris is in full flow, which it needs to be – the scene is the crisis-point of idea-clash in the story, where if the Dominators had just asked for help, the Dulkians (a singularly uninspiring bunch in every version of the story, and intentionally so) would have given it to them freely, but Rago announces he takes what he wants, and what he wants are slaves. That intransigence, that sense of superiority, is why the Dominators can’t have nice things – not only are they mean boys who won’t play well with others, but hey have no manners either! Again, it’s clear that The Dominators is a story told on every playground, a spacefaring fairytale where the wizard and his friends help the villagers defeat the bullying giants.

Does it work as an audiobook?

Yes and no is the honest answer. Ian Marter’s prose does two contradictory things – it makes the Quarks more interesting than they were on TV and the Dominators less so. Troughton’s reading, likewise, gives good spacefaring hero and good innocent Dulkians, but only occasionally really gets the growl that makes the Dominators such interesting, misanthropic, quarrelsome gits on screen. The overall balance feels off, and while there are very many worse ways of spending four-and-a-quarter hours, the pedestrian story and the lack of the vocal commitment to its central villains makes The Dominators audiobook feel like more of an also-ran title than it should be. Tony Fyler