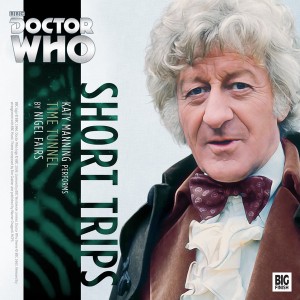 Doctor Who: Short Trips: Time Tunnel – Written by Nigel Fairs & Performed by Katy Manning – Download (Big Finish)
Even though he isn’t the Doctor that I grew up with (I’m not that old, okay?), and as such it’s sort of breaking the ‘rule’ that governs such things, I’ve always thought of the Third Doctor as being “my” Doctor. Don’t ask me why that should be; for the life of me I wouldn’t be able to give you a reasonable answer, or at least one that made any sort of sense anyway. If pushed I’d probably mumble something about his almost pulp hero persona, the eccentric scientist with an indomitable sense of adventure and a driving; almost overwhelming sense of right and wrong and a fierce desire to always see good triumph in the end. He was almost like a Science Fiction version of ‘Doc Savage’, but with a better car, an extremely “individual” sense of sartorial matters and ship that meant he was never confined to one time or planet. Unlike Doc, who was “trapped” on thirties Earth. My early childhood was spent pouring over, and absorbing, the adventures of Dent and Halston’s square, jawed “super” man, so I suppose it was inevitable that I’d gravitate to the Third Doctor, the pulpiest and, arguably, most heroic Doctor of them all.

Why mention the pulp link? Well, because every hero (or Doctor) has his time; and ‘Time Tunnel’ is probably one of the most period specific Third Doctor stories that it’s been my pleasure to hear. It’s an Earth bound UNIT tale of strange deaths, discrepancies in time fields and existence beyond our understanding of the linear nature of life and time, and there’s an undercurrent of ‘The Daemons’, ‘The Green Death’ ‘The Silurians’ and ‘The Ambassadors of Death’ running through it, as it incorporates the same sort of paranoia, fear and mystery that its predecessors thrived on. After being sent to investigate why a train full of two hundred people entered on side of a tunnel with all on board alive and well and emerged from the other side with every single passenger having died of malnutrition, The Doctor and Jo stumble into a quagmire of local legend and bizarre chronal problems an just as they’re about to, once again, save the day, they discover that bureaucratic brick walls and orders will always waylay the best laid plans of mice, men and Timelords.

Katy Manning’s energised and emotive reading, coupled with her fantastic interpretation of The Doctor, lends Nigel Fairs excellent story an air of authenticity and immediacy that transports you back into time to a period of classic adventure, recreating Jo and her Doctor’s time together perfectly. You know the expression, ‘size doesn’t matter?’ Well, this time it’s true. Even though ‘Time Tunnel’ is just over thirty minutes, slightly longer than a single episode of the classic show, in duration, it’s a captivating and interesting story that you’ll find yourself returning to, time and time again. It may be short, but it’s a lot of fun… Tim Mass Movement