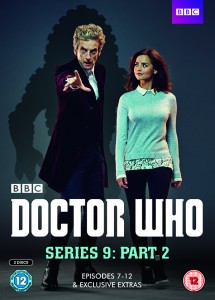 It’s been a long, and often difficult, journey up to this point. One fraught with false starts and high octane spectacle, flashes of inspired genius and insanity, stories that have left the faithful feeling flat and tales that have left us on the edge of our seats, biting our nails in fevered expectation and excitement. The Twelfth Doctor’s tenure has been somewhat schizophrenic, veering widely between adventures that have made my soul soar with sheer joy and misfires that have torn my heart out and stamped on it over and over again.  Then at the beginning of the second half of Series Nine, something changed, there was a discernible shift in the direction of the show and it finally felt like everything had fallen into place, Doctor Who began to fire on all cylinders and Peter Capaldi irrevocably and decisively stamped his identity on the role and at long last, made it his own.  The Doctor was, and is, well and truly in.

Beginning with the rather good Zygon secret occupation two part story, The Zygon Invasion and The Zygon Inversion, which not only brings back UNIT and Kate Stewart, but also sees the previously deceased Petronella Osgood (with a believable, or more accurately, as believable as things get in the Whoniverse, explanation of why she didn’t really die despite the fact that we saw it happen) return to the fold. Filled with betrayal, treachery, this fifth columnist drama returns to the social commentary that’s as much a part of Who’s history as the Tardis. It critiques immigration policy and champion’s integration, understanding and the sharing of cultural identity while lambasting any, and all, ideas of segregation. It’s a classic Who story, and let’s be honest, who doesn’t love the Zygons? I’m a sucker (I know, it’s awful, but just go with it) for them, and I’m pretty sure most of you are as well. The shape-shifting horrors are followed by Mark Gatiss’ atmospheric “found footage” tribute to the halcyon days of fifties and sixties extra-terrestrial conquest films and monster movies, Sleep No More in which humanities favourite nocturnal activity becomes the enemy thanks to the vilification of its previously harmless by-product. Then it’s hankies at the ready time, as Clara makes her exit and becomes the first long-time companion to die on screen since Adric caused the extinction of the dinosaurs. Face the Raven finds The Doctor and Clara once again entrapped and inveigled in the machinations of Me (formerly Ashildir) while attempting to save old acquaintance Rigsy from the fate dealt to him by a strange tattoo. Clara, determined to do slightly more than investigate the cause of her friend’s woes, sets in motion a chain of events that not only results in her own end, but also condemns the Doctor to an eternity of torture at the hands of a most unexpected foe. And it’s here, in Heaven Sent, where Peter Capaldi stands tall and delivers a frankly remarkable performance in a, for all intents and purposes, solo story that sees him spend four billion years as a prisoner of his own people. Caught in his confession dial, he becomes determined to escape and seek Justice for himself and Clara despite the best efforts of his captors. The series finale, Hell Bent, sees The Doctor enact his retribution as he inflicts his punishment on Gallifrey, attempts to save Clara and comes to realise that in doing so, he’s become everything that he once feared and stood against. And as the dust settles and he reaches the end of his voyages with his companion, he readies himself, once again, to turn the page and begin a new chapter. As endings go, it’s up there with the best of them.

Trying to pinpoint exactly why all of the stars in the Whoniverse aligned during the second half of this series and made Doctor Who great (don’t get me wrong, it was always good, but now it’s more than good, in fact as a cereal obsessed tiger is fond of saying ‘It’s great!’) again is next to impossible. Because it isn’t just one thing, it’s a combination of factors. The writing is tight, driven and purposeful and the plots, characterisation and story development are focussed, interesting and enjoyable, but most of all the Twelfth Doctor has discovered who he is. He’s a wonderful amalgamation of the first four Doctors, possessing the irascible nature of the First, the childlike curiosity and eccentricity of the Second, the determination, loyalty and courage of the Third and the tenacity, stubbornness and slightly mad, and definitely dangerous way of looking at the Universe and solving all of its problems that were so essential to, and engrained in, the Fourth Doctor’s personality. He’s the Doctor and he’s here to save us…  Tim Mass Movement