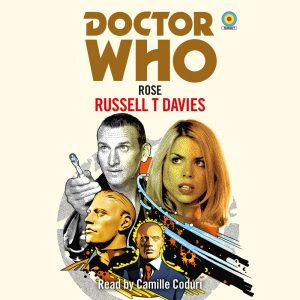 That’s the word for this one.

Rose on TV was a phenomenon in itself, bringing the spirit of Classic Who right up to date with the 21st century, launching us into the life of a more damaged Doctor than we’d ever met before, first told us about the Time War, clueing us into the notion that the Time Lords and the Daleks were all dead (You want to talk about the derring-do of a female Doctor in a series with no familiar monsters, try a cold opening to a series where you immediately tell people two of the only things they were likely to remember about the old version are entirely dead and gone and we should all move on). And, as shown by the title of the episode, it also made it clear that there’s be none of that old ‘required weakness’ in the companions in this 21st century version that saw Classic companions twist their ankles just so they could be helped, get captured just so they could be rescues, and essentially play out the Damsel in Distress role, having to be rescued by their knight errant. Rose had a family, had a boyfriend, had connections with her life on Earth, and had a wicked line in saving the Doctor’s life and pointing out the things he couldn’t see. If he wanted her to be involved in his life, the 21st century Doctor would at least on some level have to take all her baggage too. Yes, it was going to be a rollicking great ride through time and space and danger, but Rose was also anchored to her people and planet – like most of us would be, while still wanting to run away for adventures in the big blue box.

Given the chance to novelise his own series-rebooter, Russell T Davies goes mega with the retelling of Rose with a decade or so of hindsight. It’s essentially the same story with the same beats, but it’s subtly bigger and better, and gives you soooo much more than the on-screen version ever had the time or the budget or the knowledge to do.

Let’s just see. Among plenty of other elements not seen in the televised version, there are:

Better than all of that though, from a geeky perspective, is the expansion of Clive’s list of Doctors to include the guy in the brown suit, the guy with the monster chin, the older angrier man in a caretaker’s coat, and ‘a blonde woman in braces, running away from a giant frog outside Buckingham Palace.’ Davies then – because he’s Russell T Davies, and if he can’t, then who can? – extends the list even further, teasing us with potential future Doctors, which couldn’t be more right-on, or more exciting if it tried.

And at least as good as this catch-up with Doctors who’ve come and gone since the original TV episode was shown, and some who may at some point have their time in the Tardis, there’s a whole sub-plot which owes more than a nod to Steven Moffat’s Weeping Angels, but which extends the threat and the scope of the story significantly. We’ll just say there are people in this story who get ballerina’d to death (Could this story GET any more Russell T? It can now!). There’s also a sub-plot with the occupants of one of the pods on the London Eye. We won’t spoil it for you, but suffice it to say there’s a lovely moment of ‘draining the swamp’ at the end of that, and everybody lives – which is just as well, as the Doctor and Co have happily naffed off, ignoring this domestic drama in which human lives are distinctly at stake as a result of their killing the Nestene Consciousness.

Camille Coduri on reading duties is very solid – though here, more than in The Christmas Invasion audiobook, her Rose feels more Jackie-like (though if you want to get technical of course, this is a Rose more under the thumb of her almighty mother than the one we encounter in the later story, which could be said to explain that). She brings plenty of smiles to the listener’s face, not least because Camille Coduri ‘doing’ Christopher Eccleston’s Northern Doctor is freakishly close to Jodie Whittaker(!), but she also effectively puts you through the wringer when she needs to – perhaps most of all during the sequences with Clive, his wife and sons as the Autons rampage.

If Rose on TV was the beginning of a brand new age of Who, then Rose the audiobook, written by Davies and read by Coduri is the HD, 3D Director’s Cut of the story, with much more character development, way more richness and brightness, a whole other range of Auton creepiness and Easter eggs all the way down the line.