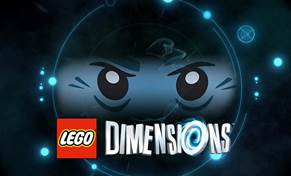 Imagine an incredible world where the Doctor teams up with Batman, Gandalf and Wyldstyle to defeat his evil foes; where the Doctor can dance down a yellow brick road or travel in The Mystery Machine with Scooby Doo. LEGO Dimensions is the new Toys-To-Life game from Warner Bros. Interactive Entertainment and features the biggest brand mash ups the gaming world has ever seen – now including Doctor Who.

This all-new entertainment experience which merges physical LEGO brick building with digital gameplay and launches in the UK on 29th September.

Peter Capaldi comments “It’s fitting that Doctor Who now sits alongside some of the most iconic film and TV shows ever made. So go forth and help the Doctor make new friends on his quest to vanquish Lord Vortech!”

Batman, Gandalf and Wyldstyle will team up with Doctor Who, The Simpsons, Ghostbusters, Jurassic World, Back to the Future and many more fan favourites in a mission to thwart Lord Vortech’s evil plan to collide all dimensions into one.

Doctor Who in LEGO Dimensions – Trailer

Using an interactive LEGO Toy Pad which will plug into games consoles, gamers can place up to seven physical toys into the game through the toy pad. This allows gamers to embark on an adventure which merges the worlds of their favourite TV and film franchises.

The LEGO Dimensions Starter Pack includes three Doctor Who levels, where you can battle the Daleks and Cybermen, complete with a cameo from the Twelfth Doctor. From November you will be able to purchase an additional Doctor Who pack enabling gamers to play as the Doctor. The pack will also introduce new buildable characters, including the TARDIS and K-9, unlocking compelling game content with mission-based levels and unique in-game abilities. The Doctor Who level pack will provide players the opportunity to use everything interchangeably, anywhere throughout the game.