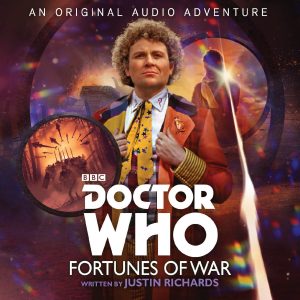 Fortunes of War is the third and – no spoilers, but probably final – part of a story which has taken three Doctors at different times in their lives to solve. As such, if you haven’t heard both of the earlier parts, Men of War and Horrors of War, you’re going to be just a little lost coming into this one.

The first two parts were read by former companion actors Peter Purves and Katy Manning, but neither of them were written from the principal point of view of those companions, though Steven Taylor and Jo Grant were accompanying the First and Third Doctors respectively. Here we’re blessed (general rule of thumb – this man’s presence on a project is always a blessing) by having Colin Baker read the final part of the story, and as such, we’re allowed a particular treat – a story written from the Doctor’s perspective, and narrated in the first person, in his voice.

If you react to that with a ‘So what?’ you’re missing the point. The Doctor we see on screen is almost always illuminated for us through the prism of his companions, and it depends how well they understand what’d really going on in that confounded brain of his how good an illumination that is – at the risk of infuriating the Classic Who fans, look at Amy Pond explaining the Doctor’s choice of where to stand in Asylum of the Daleks and Clara Oswald searching for a Doctor in the haystack of history for some of the best in over fifty years. But here, we’re right there in his mind, which means when the Sixth Doctor, now in rather more control of his Tardis than either of his predecessors, decides to return one final time to the trenches of World War I, we see him hesitate before opening the door, and hear him admit to us what he would never admit to a companion or the world – his trepidation at what he knows he has to do once the doors open, once events are set in motion.

What he has to do is put things right. Time has been bubbling in all the wrong places and in deadly, horrible ways in the trenches, firstly infesting the mud with the lifetimes of soldiers who ‘should’ be dead, and secondly through a kind of possession in a field hospital, with soldiers dying again and again, like a ghastly precursor of a great and terrible time war. This time when the Doctor goes back, he has to put it right, aware as he is of the consequences his actions will have.

Consequences, because if time is put right, the friends he made on his previous visits, Captain Mark Steadman and Nurse Annie Grantham, will have to die. Can the Doctor knowingly condemn them to death for the sake of the bigger picture, the web of time and his solemn duty as a Time Lord?

It’s a story that’s set up to tug the heartstrings right from the off, and it does that more than somewhat, especially when the source of the temporal disturbance is revealed, showing in turn the utterly ambivalent nature of the universe – it doesn’t care who lives or dies, only what is ‘right.’ Only what happens.

Baker’s performance here feels like a later, off-screen Sixth Doctor, one whose flame of moral outrage has grown a little circumspect, if not in all circumstances, then at least when faced with the impossible dilemmas not only of the First World War, but with the tangling of time and the pull of duty and compassion. What ultimately emerges is a less self-satisfied Doctor than the on-screen version ever had the chance to be, but one who faces a very ‘New Who’ dilemma, and argues it through with himself in our hearing, before proving he is the same person he’s always been, and always will be – he is the Doctor, with all that that entails. Never cruel. Never cowardly. Always clever. Always kind.

Colin Baker as an audio Doctor has been wowing audiences for more than a decade now. Justin Richards here gives him a chance to be perhaps more New Who than he’s ever been, and Baker eats it up with a spoon. The result is a release that you’ll devour eagerly too, for all its moral and temporal complexity, but ultimately for Baker in one of many moments of ultimate audio triumph as the Sixth Doctor, that flower of moral outrage at things that are wrong infused with an equal flood of compassion for ordinary people, and both tearing him apart, and forcing him to go to places inside himself that are uncomfortable, and do things he probably shouldn’t do. It’s a remarkable performance that’ll sweep your emotions ahead of it, and a fitting conclusion to a story that has at several points confronted us with the challenges of being the Doctor. Baker and his Sixth Doctor give us almost a lesson in what sets the Doctor apart from every other would-be meddler in time and space. You have to be the cleverest life form in the room, absolutely. But you also have to be the kindest. Tony Fyler