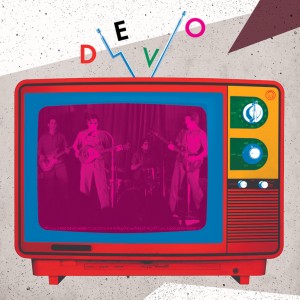 Devo – Miracle Witness Hour (Futurismo)
I used to love this band and all their early stuff, so with anticipation I start to listen to it and felt a little disappointed especially with the quality. I get that it’s live and an intimate show at a biker bar called The Eagle Street Saloon in Cleveland Ohio and the fact that it was at the early stages of their career in 1977.…….BUT it just seems that they are just churning it out to make some money, I have some live recordings of early stuff with my band but the quality is poor, like this and would never release it now.
I get the raw sound of it and it is listenable with songs that went on to get the Brian Eno touch like Mongoloid, Are We Not Men? and Be Stiff. Devo were/are very avant-pop along the lines of Talking Heads and you can hear glimpses of what they later went on to do. This is for die hard fans to be honest and if I was listening to Devo for the first time I would probably get a best of album. Paul Hoddy