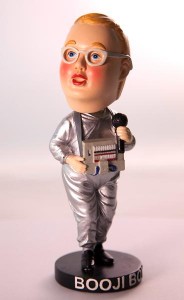 Based on DEVO concert photos dating back to the late 1970s, this limited edition bobblin’ Booji Boy figure is wearing his favorite over-stuffed exercise suit, and is armed with an early circuit-bent toy.

Take some time out for fun with Booji Boy. He’ll feel right at home in your house, at your office, glued to the dashboard of your car, or anywhere!

Booji Boy, who was conceived in the early 70s, has traits of a simian child and typically wears a nuclear protection suit. He is portrayed by Mark Mothersbaugh in a mask and is the son of another fictitious Devo character, General Boy. The intent of the figure is to satirize infantile regression in Western culture, a quality Devo enjoyed elucidating. This character was officially introduced in the 1976 short film The Truth About De-Evolution.

According to the book We’re All Devo!, the roots of the character come from discovering a baby mask in an Akron area novelty store. Mothersbaugh developed the character’s distinctive high pitched falsetto almost instantly.

Booji Boy has been a staple of Devo‘s visual imagery throughout their career. He plays a prominent role in the video of their 1981 single “Beautiful World.” He also appeared in the 1982 Neil Young filmHuman Highway in a very comical yet unsettling role predicting the end of the planet. Booji is also pictured on the cover art to Recombo DNA.
All Aggronautix figures are now available for purchase on www.aggronautix.com and will also be available at independent record stores, comic shops, tattoo parlors, etc via distribution by MVD Entertainment Group.

Pre-order yours now at http://aggronautix.com/

For orders outside of the United States, please note that items will take longer to arrive (average of 3 weeks)