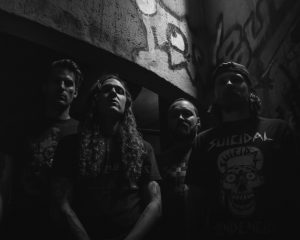 As freshly-formed outfit DETHBEDS forges its way into the Chicago scene preceding the Fall release of their Dungeon Scum debut LP, Decibel Magazine offers the record a boost into the masses with an exclusive early stream of its scathing title track.
With its members collectively hailing from a varied range of metal, punk, hip hop, and psych scenes,DETHBEDS marries this diversification with explosive fury; the result is a relentlessly energetic attack heavily influenced by the likes of Converge, The Dillinger Escape Plan, Refused, Botch, and more. Offers the band alongside the release of their debut record’s title track, “The most recently written song on the album, ‘Dungeon Scum’ provides contrast from our overall punk ethos to a more punishing and sophisticated writing style that reflects our combined influences.”
Scope out Decibel’s stream of DETHBEDS’ “Dungeon Scum” at THIS LOCATION.
Also hear the previously-released lead track “Snake Charmer” at New Noise Magazine RIGHT HERE.
DETHBEDS will independently release Dungeon Scum on single-sided 12″ vinyl, cassette, and digital formats on October 14th. Preorders are now live HERE.
In conjunction with the release of Dungeon Scum, DETHBEDS will shred through the Midwest on a run of tour dates they’re currently solidifying. With shows confirmed in Chicago, Kalamazoo, Owosso, Grand Rapids, Milwaukee, Moline and DeKalb confirmed between October 20th and November 11th, the final venues and details on the trek will be finalized in the coming days, with additional tour dates to be expected in rapid succession.
DETHBEDS Tour Dates:
10/20/2016 Cobra Lounge – Chicago, IL
10/21/2016 Free Clinic – Kalamazoo, MI
10/22/2016 Hickory Lounge – Owosso, MI
10/23/2016 The Alamo – Grand Rapids, MI
11/04/2016 TBA – Milwaukee, WI
11/05/2016 The Island – Moline, IL
11/10/2016 TBA – DeKalb, IL
A newly-formed outfit, DETHBEDS unites a host of influence from a wide array of musical backgrounds, resulting in a volatile concoction of angular metallic, punk-fueled hardcore. Formed in Owosso, Michigan, the band recently finalized a new lineup and located to Chicago, a city in which they had communed and performed together with their prior acts. Most of Dungeon Scum was written in Michigan, before the band was a fully realized project. Following their migration to Chicago, the band fine-tuned the tracks and recorded the album with Adam Stilson at Decade Music Studios, located inside of DIY music venue The Observatory, after which it was mastered by Collin Jordan at The Boiler Room, and completed with cover art by Tom Jenkins at Black Eagle Press.
Photo by Adam Crombleholme