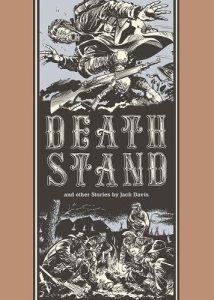 It’s always a treat to find one of the EC Library volumes in your review pile, even when the tome is of a genre that in your days as a comics collector you eschewed, spinning the rack on in favour of more fantastic or spandexed fare. In this case, the genre is war, more specifically war as illustrated by Jack Davis for titles such as Two-Fisted Tales, Stars and Stripes and Frontline Combat.  The ‘frontlines’ in this collection range from the American Civil War through World War I and II, through the Korean conflict, and more, but the message from each essentially remains the same: war is, if not the hell the cliche has it, then a messy business … a very, very messy business indeed.

Herein you’ll find guts falling out and being pushed back in, emergency appendix ops, soldiers dying of thirst because they are bleeding out of so many holes in their fronts, backs and sides, taking water would be deadly. These events and gorier are occasioned by an almost constant rain of enemy fire from mortars, rockets, tanks and machine-guns. It’s with this latter that Davis’s art comes into its own, because Davis has a way with bullets – bullets puncturing arms, legs, heads, bellies; bullets out of nowhere that reduce a torso to flying chunks while its owner dances like a stringless marionette. Bearing this in mind, heed my advice and never – I mean never ever – step onto a Jack Davis battlefield.

But here’s the thing. Little here is sensationalist. Little gratuitous. I’m almost tempted to say most is unexaggerated. Because Davis was a veteran – like many in the EC stable he’d been to war – and what he saw informs his pages, albeit with the artistic license a commercial title demands. Together with writers Harvey Kurtzman, Al Feldstein, Jerry De Fuccio and Colin Dawkins, he delivers a series of tales cum vignettes that despite the preponderance of exclamation marks – “Mud!”, “Combat Medic!”, “Death Stand!” are actually less jingositic or gung-ho than anti-war, or at least anti the folly that war is.  So, here you have tales of unlikely friendships, of lucky mascots, of personal sacrifice, of destiny, karma and fate, deserved and undeserved. There are thirty-four of them in all, bookended by Fantagraphics’ usual informative background and biographical features. Death Stand And Other Stories is thoughtful, in parts surprisingly harrowing, and well worth a read. Just keep your head down and watch out for those Davis bullets. Mike Wild