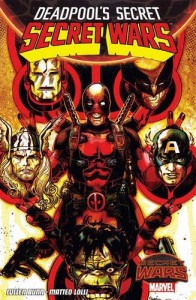 With the whole world raving and raging about Secret Wars, the current crossover event that’s set to change the face of the Marvel Universe, it’s easy to forget that before Secret Wars, there was Secret Wars. Confused? I know, it can seem that way, but it really isn’t. See, way back in the mid-eighties, Jim Shooter wrote a series for Marvel called Secret Wars, the crossover event that would shape every other big comic event that followed in its wake. And it’s that Secret Wars, the original Jim Shooter story, that Deadpool finds himself a part of in Deadpool’s Secret Secret Wars. Similar in style to the infamous, and always awesome, What If? series of stories, Cullen Bunn’s story injects Wade into the thick of the action that saw The Beyonder kidnap a group of superheroes and villains, forcing them to fight for his amusement.

Transplanted into the story, and retold from his perspective, Secret Secret Wars, follows Wade as he interacts with his fellow heroes in the major plot points of the event. Funny, touching and heart- breaking, he gets everything his heart desires and then gives it all up for the sake and safety of his new allies, friends and , surprisingly, love.  As well as being an engaging and amusing read, it also shows a side to Wade’s character that has been somewhat neglected, humanising him, making him seem, well, almost normal. Sure, he’s still the same wise-cracking smart arse that he’s always been, but Cullen Bunn exposes Wade’s soul, and in doing so affords us a glimpse of the vulnerability of man that hides behind his humour and mask.  Then there’s that ending, that beautiful ending in which Wade’s lack of presence in the original event is explained, an ending which questions the true nature of a long established hero and flips long-established ideas of who they are, and Wade really is, upside down and inside out. Matteo Lolli’s glorious artwork reimagines and reinvents Zeck’s work perfectly and gives Bunn’s tale a sense of period and place without losing any of the punch, drive and energy that exists at the heart of all great Deadpool stories.  And folks, believe me when I tell you this, Secret Secret Wars is a great Deadpool story. Even though it assumes that you’ll have a working knowledge of the original event, you don’t need to have read Jim Shooter’s book to fall in love with Secret Secret War, as it works brilliantly in its own right, forging its own identity while expanding upon the event that it sprang from and has become a part of.  I’m going to keep this short, sweet and simple. Just get it. Get it now… Tim Mass Movement