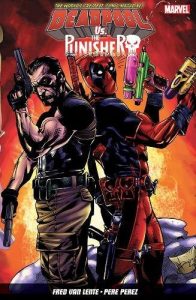 Oh boy, who do you route for when the big guns of psychotic mass murder and homicidal retribution end up going toe to toe in a kill them all, let whatever gods they believe in sort them out action spectacular? That’s a tough one. On the one hand you’ve got the original purveyor of blood, guts and carnage in the name of justice, Frank Castle, aka The Punisher, and on the other you’ve got the crazier than the entire cast of Ken Kesey’s most famous novel, merc with a mouth Wade Wilson, aka Deadpool. So, do you go with the classics and stick with the reliable, and murderously dependable vintage prototype, or take a chance on the kooky, out of whack and way out of step with the world around him, inventively violent, newer and undoubtedly faster model?

That’s a question that would leave even the most ardent fans of lead slinging mayhem scratching their heads and puzzling over the minutia and benefits of both for hours on end, but luckily in Fred Van Lente’s take of vengeance and punishment, you don’t have to as Wade and Frank sort of pool their resources in order to achieve their (again,sort of) mutual goal. Although it isn’t really a joint  as the tale begins, their “missions” have little, if anything, in common,  but as these things often do, fate ends up throwing them together as the bodies begin to mount and the events that they’ve become caught up in gradually become more and more treacherously twisted and deliciously convoluted and detailed.

Playing out like the best eighties action spectacular that Sam Peckinpah never got to make, Fred Van Lente’s tale of the heavy hitters being forced to work together by circumstance, scheming and betrayal (make that lots and lots of betrayal), is a delightfully dark, strange and blackly humorous odd couple adventure in which lots of bad guys die and wicked folk get their well-deserved come-uppance.  While Van Lente’s plot doesn’t follow the rocket science school of thought and doesn’t over-complicate the story, it does contain enough unexpected twists and turns, vicious backstabbing and wisecracking dialogue to make even the most demanding members of Wade and Franks fan clubs deliriously happy while Perez meticulous and intricate art is soaked in more carnage and viscera than a shelfful of the unsettling video nasties.  And it is, from beginning to end, absolutely glorious…  Tim Cundle