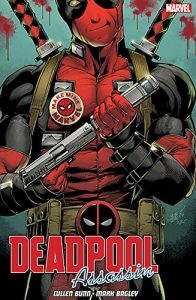 Wade’s gone and got the band back together and with his right hand man, Weasel, by his side again, they’re getting the big scores and ridding the world of bad guys, one contract at a time. That’s right folks, Deadpool and his handler, agent and occasional friend Weasel are back on the job for what Wade is hoping will be a limited run as he’s got his heart set on a retirement plan that involves his own tropical island and as many tiki-tiki umbrella drinks as his remarkably robust constitution can handle. However Wade being Wade and having learned many moral lessons, some of which have stuck but most of which haven’t, from his time in the Avengers, has developed a strict code and will only take the jobs that his conscience allows him too. Which are, in all fairness, most of them that head his and Weasel’s way, which means that the kill-train to paradise is on course and merrily chugging its way down to the tracks to retirement-ville. Or at least it is until Weasel takes a job that not only violates Wades code, but also puts them both in the crosshairs of the Assassins Guild. With no way out of Dodge and every hired-gun on the Guild’s membership list after the price on their heads, Wade and Weasel find themselves locked  in a game of kill or be killed that’ll only end when either they, or every single killer on the Guild’s books, is dead.

Being a flag waving, card carrying member of the Cullen Bunn fan-club, it was a no brainer that Assassin was going to float my boat and have me whooping with joy from the minute I started reading page one.  Packed to the rafters with on point, fourth wall shattering dialogue and zinging one liners, Assassin drops Wade straight into a festival of gung-ho violence that lets him do what he does best. Kill absolutely everybody in the room. And next to Wolverine, he’s the best at what he does. In fact, you know what? I think Wade might be even better at the old homicide game than Logan is.  I mean, come on, we’re talking about the guy who, in an alternate time-line that defies all rational explanation so don’t go looking for one, murdered the entire Marvel Universe.  As well as providing the plot for all of the gorgeously rendered mayhem that comes courtesy of the splendid eighties retro inspired style art of Mark Bagley, Bunn’s story explores the darker side of Wade’s chosen profession as he’s forced to once again face the brutal truth that you can’t make an omelette without breaking a few eggs and that bullets and swords don’t just kill bad guys, they take out the righteous and the innocent as well. Loaded with the kind of “Gosh I didn’t see that coming” style betrayal that seems to be part and parcel of Deadpool’s life at the moment, Assassin also questions just how much treachery, loss and pain Wade can actually take before he snaps, which is seemingly the point that he’s gradually being pushed toward by Bunn and the other scribes responsible for his destiny.  Get your tissues ready, put your action goggles on and strap yourselves in, it’s Deadpool time…   Tim Cundle