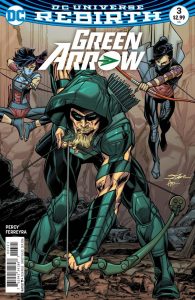 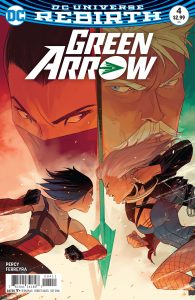 I’ve made no secret of the fact that Aquaman is the best of the bunch from this clutch of “Rebirth” lines from DC, but what about his fellow Justice Leaguers and their own personal “Rebirths”? Two titles which may have a higher profile these days as a consequence of TV adaptations are Green Arrow and The Flash. Will a new generation of kids be turned on to the joy of the comic book? Will they pull themselves away from their “devices” for long enough to read something that isn’t made of pixels … Green Arrow Rebirth #3 finds Oliver Queen ostracised by everyone he knows and loves, frozen out of his fortune but still swinging around wazzing off arrows at baddies. “The Ninth Circle” has Oli looking in to corporate misdoings and looking to find out who’s behind it all in his usual on the fringes of the law manner. Sinister deals and an army of disfigured looking henchmen are the last of his worries as the big boss of badness makes Killer Croc look like Brad Pitt. Who’d of thought crooked banking business was at the root of all evil? Do I detect a little hint of a political dig there? Big bad corporations are not exactly new territory for bad guys I suppose but in the current climate maybe the bankers will be copping more flak for a few years yet? Green Arrow Rebirth #4 has Diggle and Black Canary turn up to reform “Team Arrow” and with the gang back together they set out to take on the awful adversary in his lair. A very gritty tone, as befitting the vigilante theme of Green Arrow, pervades throughout and while not quite as dark as the Caped Crusader of Gotham, Oliver’s Army makes for a more “real” take on the good vs bad axis than books where folk fly around and throw helicopters at each other.  Not bad, not bad at all. 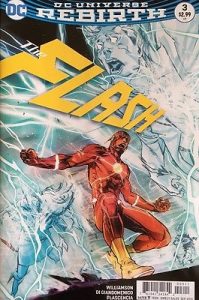 Unlike the Arrow, then, The Flash #3 does deal with super powered folk and there’s plenty of ‘em to deal with in the newly reborn Flash run. Some supernatural, super powered scenario, the type that always happens in comics but never happens to me, has rained down super speed on a whole host of Central City denizens. Flash has a super speedy Detective zooming about with him and an army of trainee speedsters back at Star Labs under the watch of Dr Dhawan who is also at one with speed force and just might have caught the eye of a flirty Flash! Unfortunately, and as you might have guessed, not everyone has such altruistic motives when presented with the power to move at insane speeds and as is always the case, there’s a new boogie man in town. A most enjoyable issue with kinetic artwork and giving us Barry Allen as a mentor to members of the public who have had super human speed bestowed upon them. There’s a touching moment where Baz helps out a little lad who can’t control the fantastical forces that are suddenly at his disposal, suggesting a new role for our hero. The Flash Rebirth #4 continues this line and finds further flirtatious Flash frolics with the foxy Dr Dhawan and that old favourite, the bad guy who wants all the power and is meddling with (speed) forces that he can’t control …  This is a great start for Barry and co with bright and brash artwork and plenty of colourful episodes and adventures in stark contrast to the tone of the recent Green Arrow. If I were to choose one, I’d side with The Flash but hey, we don’t have to choose do we? Have a go on ‘em both. 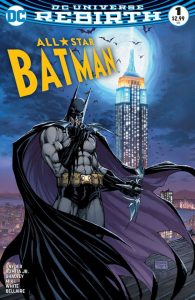 Talking of TV tie ins, Gotham may be out on its own and not cross over in to the Flash/Arrow world – or at least it hasn’t yet – but the Batman brand doesn’t need a TV show to boost sales I imagine. All Star Batman Rebirth #1 drops in on the Caped Crusader mid scrap with a pair of bug like baddies and suggests that not all of the public the Bat protects are actually fans of the vigilante. There’s a new Robin (again) and Harvey Dent is up to no good. A short story tagged on the end expands on who this new Boy Wonder may be and how his raining is going at Bat School. Pitting the Bat not just against the usual round of villains but also the public themselves, and well, those even closer to home gives this new title a few hooks to keep you coming back for more if you are Bat way inclined. 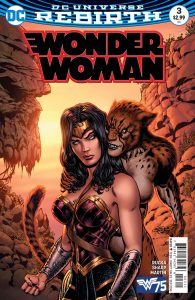 Branching out further in to the Rebirth-iverse and we find Wonder Woman in fine fettle. For me, the strongest of the New 52 titles by an Amazonian mile, the 75th year of Diana’s escapades takes the unusual step of having two separate tales running every other week. If you are following the odd numbers you’ll be tracking a dark tale of the Goddess of War’s travels in to the jungle, via Wonder Woman Rebirth #3, to meet up with the Thundercat like Cheetah. It sort of goes well, it sort of doesn’t …  If you are reading the even numbers, you’ll be entranced by Wonder Woman Rebirth #4 re-telling the origins of how Steve was washed up on the Amazon’s island and a certain one of their sisters was chosen to visit the world of men. Whether we need this tale telling again is up to you and your discretion, but when it’s done so beautifully Wonder Woman can have my three quid every other month. The odd numbers has a murky gloom about it whereas the even episodes are vivid evocations of life on the Isle of Themyscira and will have long time fans falling for the Amazons all over again. Wonderful. 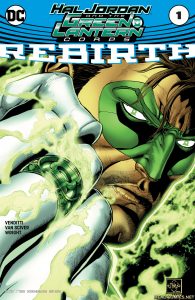 Green Lantern has been one of DC’s strongest titles for me over the years. Hal’s heroics have kept me entertained consistently and I’ve followed most of the titles in some way or other for yonks now, the high point being the mighty Geoff Johns run that introduced a whole array of colourful lanterns and disciples of all shades of the spectrum. Two books are running concurrently in the new line and Hal Jordan And The Green Lantern Corps is the stronger of the two. The New 52 found Hal wandering around space and getting in to adventures with a rag tag crew a la Han Solo. The Green Lanterns home world of Oa has been destroyed and the Corps themselves have gone AWOL. Hal Jordan And The Green Lantern Corps #1 and #2 present a universe turned on its head. An aging Sinestro has replaced the Guardians as the galaxy wide authority who’s Corps do his bidding spreading fear. Sat in his Warworld he oversees the lot with former green ring slinger, and daughter, Soranik Natu at his side along with Lyssa, who let us be honest, is something of a sexy witch. Not on Hal Jordan’s watch though and the original and best of all the light wielders is not gonna stand for any of this. No way. This is a great book, returning to what made Green Lantern so good – the battle between Hal and Sinestro. The iron will of one vs the unspeakable arrogance of the other. The artwork is as wildly imaginative as ever and the return of the Corps to do battle with the Yellow peril promises all manner of mayhem. I do hope there are more of the travelling man sort of tales that the New 52’s later episodes had, seeking out and helping out strange new worlds as he goes, but hey, if there’s a massive dust up with Sinestro and his mob of mutants, I’ll still be grinning. 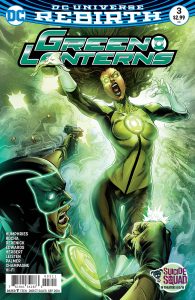 The second green periodical in the Rebirth is Green Lanterns which has pretty much done away with Hal as he is off in space rucking with his arch nemesis. The guardianship of Earth has been entrusted to Simon Baz, who we met in the New 52. Adding some racial diversity to the line, Simon spent the early issues of his introductory story arc, insisting the colour of his skin does not make him a terrorist. Now he’s a fully fledged Lantern but still pretty wet behind the ears. If Simon’s a beginner, then his partner in green duties, Jessica Cruz, is still struggling to form constructs with her ring! A sufferer of agoraphobia like anxieties, it’s a wonder why she was selected for the ring’s responsibilities at all. Green Lanterns #1 to #4 frame the first proper run as Green Lanterns between the bickering and barely competent pair around an Atrocitus lead Red Lantern invasion of Earth. Jessica is pretty useless, low on self esteem and confidence and baffled as to what she is doing in this position. Simon, is further down the training line but still something of a novice and not exactly the most understanding partner. As a buddy movie type set up, it has legs but I can’t say how long my patience will last with the bickering incompatible partners and not very good at being a Lantern schtick. There’s plenty going on with each character – they both have families to worry about – which will hopefully see some expansive exposition as the title gets in to its stride. It is a change mind, to see a couple of Lanterns who aren’t all powerful, coming to terms with the potentially limitless abilities that reside on their fingers and not finding superhero-dom as effortless as the Justice League big hitters do. If only they could unlock that potential eh?

So this Rebirth caper – is it any good? You want my advice? Keep an eye on Hal Jordan, Aquaman and Supes. Marv Gadgie