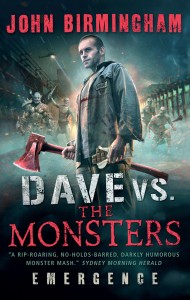 When an oil rig off the Gulf of Mexico digs too deep, a torrent of nightmares is unleashed the creatures of legend, always thought to be figments of our imagination, are now a very real threat to the survival of humankind. Safety worker Dave Hooper has the hangover from hell, and the last thing he needs is an explosion on his oil rig. But this is no accident, and despite the news reports, terrorists aren’t to blame for the carnage. The rig is swarming with monsters. As he fights to save his co-workers from the ravenous demon horde while holding down last night’s tequila, Dave is suddenly transformed from a foul-mouthed, overweight, booze-soaked slacker into something else entirely. An honest-to-goddamn monster slayer.

John Birmingham is an author I had heard about in passing, via the internet, when this was released in Australia a little while back. There was a fair amount of buzz surrounding this novel, so, the big question was always going to be ‘Does it live up to the hype?’ Yes, yes it does. After a slow(ish) start which in retrospect was necessary to set everything up, all hell breaks loose and ‘Dave vs the Monsters’ turns out to be as cleverly laid out as it is action packed and funny. Once it gets going, Dave Hooper turns from a hung over bum into my new favourite axe wielding ass kicker in a matter of pages; and considering there are 381 pages to work through ‘Emergence’ was pretty easily devoured in one big sitting. The only problem, with this being the opening part of the series, could be how high ‘Emergence’ has set bar and whether the next book can live up to its predecessor. I can’t wait to find out what happens next… Gav.