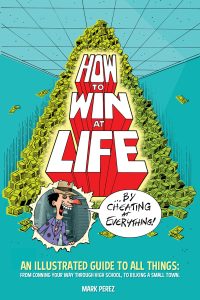 Dark Horse is proud to announce it is branching into the self-help book market with How to Win at Life by Cheating at Everything by Mark Perez (Accepted, Coach). Scott Shaw (The Flintstones, Captain Carrot) lends his Emmy Award–winning illustration skills to the Hollywood screenwriter’s debut illustrated prose book, a humorous how-to for burgeoning criminals.

The satirical novel follows the adventures of one of the most notorious con men in the United States. Jonathan Dough (an alias, of course) relates to Perez stories from his turbulent upbringing and entertaining adulthood. In addition to the personal tales, Dough also shows how to commit crimes and pull off successful cons. The result is an in-depth and fascinating explanation of the glorious world of grift, the science behind scams, and most importantly, how to be a successful criminal.

Mark Perez explained his decision to write an illustrated novel: “I think the bummer about being a screenwriter is you need to be totally cool with the fact that most movies don’t get made. Maybe that particular script you’ve been working on for a year, the one that’s made you crazy and almost ended your marriage, will probably only be read by about four or five people (people who read ten or more scripts a day). It’s a real bummer creatively. So, when the idea came along for writing a book, I was intrigued by the fact that maybe more than four or five people would actually be reading my words. There was a different motivation behind writing the novel, something I hadn’t felt in years: the guarantee of an audience.”

How to Win at Life by Cheating at Everything goes on sale March 8, 2017.