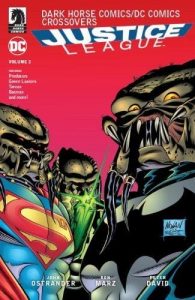 The eighties gave us the blockbuster franchise building movies Aliens and Predator which have developed in to far more than films over the years. When they inevitably were drawn together – the most ferocious and driven hunter in the entire galaxy versus the most horrific and deadly adversary in all of the universe – it was, of course, exciting. In comics it has been, at times, great and on the big screen, well, not so … who will win? Who cares! Just sit back and let the carnage commence. When in the “real” world, if you can use such a phrase, it’s clear that these beasties are far too brutal and wass hard for the likes of mere mortals like the human race and people who accidently chance upon this intergalactic tag team tussle are generally doomed. Even Arnie found Predators hard going. It becomes a horror action survival thriller. What however, would go down if the gruesome twosome were pitted against the great and the good of the DC comic’s world? What if fantastic super powered people were lined up as the opposition instead of a bunch of gung ho marines who could be picked off one by one? Well, then Mr Predator and Miss Alien Queen, you will probably meet your match! Bring on the Justice League!

It’s big, it’s bright, it’s bold and it has the perennial war mongering invasion freaks The Dominators. Justice League versus Predator is a fun comic book caper that sees a bunch of souped up Predators with Justice League-esque skills pitting their wits against their equivalent Superhero. With the bespoke Predators showing off their super speed and strength and whatnot, it’s an interesting twist that gives the Justice League a headache but as I mentioned earlier, we all know, let’s be honest, that no matter how bad things look, Superman and co always win. It’s not exactly a spoiler to suggest to anyone who has read a comic book before that the Predators have met their betters and in the end the good vanquish the bad. This is the problem I face with Super Hero comics. Much as I love a bit of Action Comics, Wonder Woman and Green Lantern, there is a predictability to it all that sometimes leaves me wanting a bit more. A bit less action a bit more character. Bad guy turns up and causes havoc. Has our hero met his/her match? It looks that way for a while and then inspiration strikes and the day is won! Hurrah! Everyone is happy. There is an element of this in the next tale which pits Kyle Raynor, in the post Hal Jordan Corps-less era of Green Lantern against the xenomorph of Alien. A prologue finds Hal, in his heyday, with a bunch of do-gooding Lanterns taking the moral high ground when they should really have ignored thou shalt not kill. It of course, comes back to haunt the future Lantern Raynor and a mess needs tidying up on Mogo. Poor old Mogo, the sentient Green Lantern planet, has a pesky Alien infestation and a crashed ship sends a distress call, a lone female survivor … we’ve seen it all before but it’s great fun. Again, the art work has that big and bold colourful look to it that sets an exuberant tone of fantasy and fun. I say it’s as predictable as a Rom-Com but I keep coming back for more don’t I?

Batman. Now he is anything but bright, bold and colourful and when he teams up with Tarzan in the grittier Claws of the Cat-woman, I was initially ever so excited. Catwoman. I’m a big fan of Selina Kyle as one of the few folk who ever gets one over the Bat. Bruce the Bat himself, I’m never so taken with as I always get the impression he’s that bloke at work who always wants to make out how awesome he is. Disappointing then, that it’s not actually that Catwoman. Nope, it’s Cat-woman. That hyphen denoting that the Bat and the Lord of the Apes are dealing with an Indiana Jones like caper that involves some ancient culture deep in the jungle and their Princess who doubles up as a cat burglar complete with cat suit. Selina will not be happy … This entry is much blunter and violent with the two jungles of Gotham and the, erm real jungle, serving up scraps aplenty to keep fans of both warriors happy.

The final episode is a hyperactive tale of Spyboy that seems to blend the Teen Titans like Young Justice mob with Spyboy and utterly loopy flash bang wallop Japanese Anime. I feel a 40-something punk like me is not the target demographic here. More like my teen daughter who would probably find it most amusing and edgy while I simply need a lay down after reading it and a cup of coffee. Bananas.

So there we have it, another eclectic crossover collection hits the shelves and if you side with the supers then you’ll enjoy it in a comfortable fashion where things go down but don’t worry, it’ll be alright in the end. You aren’t gonna see Superman dismembered or a Wonder Woman chest burster scene. Frank neo realism this isn’t. Bright and breezy fun it is. Marv Gadgie