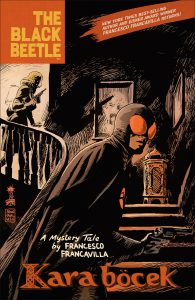 The Black Beetle is flying back for more adventures in The Black Beetle: Kara Böcek! The first issue of The Black Beetle was published in late 2012, and the title quickly became a critically acclaimed original series at Dark Horse. This new story from Francesco Francavilla’s superhero noir thriller was recently featured in Dark Horse Presents.

The Black Beetle: Kara Böcek follows the masked American hero as he ventures to the Middle East, traveling incognito (as Tom Sawyer) to fight Nazis in pursuit of a mysterious object of terrible power. This weapon of unknown origin is older than the pyramids and could fuel the Thousand-Year Reich of Hitler’s dreams. This five-part story originally appeared in Dark Horse Presents #28–#32.