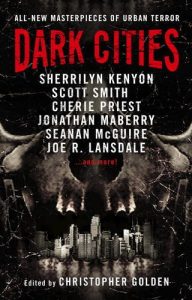 Themed short story collections are everywhere, aren’t they? Traditional publishers’ shelf space, both physical and digital, squeezed in a pincer movement from burgeoning small press titles and the rise of charity compilations more professional and better marketed with each passing day. Amongst your Bobblehead Cthulhu collections, your Transforming Airship collections, your Rabid Zombie Wombat collections and your Wacky-Racing Werewolf collections – okay, I made those up, but they’re not so far from the truth – it’s become quite the challenge to find and hang your shingle on an unused USP.

Who can blame Titan, then, for casting their net wider in terms of theme than There’s A Vampire In My Fridge or Things That Bite Your Bits While On The Bog Doing Your Biz. Their Christopher Golden edited Dark Cities takes as its launching point the urban landscape; not just the buildings but the space between them too – the lonely, soulless, predatory vacuum that can be found at the heart of every metropolis when even the clubs are silent and done. But painting on such a broad canvas as this brings its own problems – too broad a theme isn’t really a theme at all, and, in truth, the only commonality here is that none of the stories are set anywhere green.

And there’s the rub. Dark Cities isn’t really themed and it isn’t really strong enough to hold its own as a generic horror collection. At best, it’s ‘okay’. Of the twenty stories on offer here, a couple are memorable, a few enjoyable, some lacklustre, and one so excruciatingly awful that I would have rejected it from a fanzine thirty years ago. I shan’t embarrass the author of the latter by identifying him/her or the story but, mark my words, you’ll know it when you read it. A couple of misjudged editorial decisions compound the problem – one too many ‘party’ stories, for example, the first of which, editor Christopher Golden’s own The Revelers ranks among the memorable, while Simon R. Green’s Happy Forever, not so much, partly through no fault of its own by echoing the former’s superior tale.

There is enough here to make it worthwhile shelling out your shekels – Seanan McGuire’s Graffiti Of The Lost And Dying Places, Tim Lebbon’s In Stone, Jonathan Maberry’s Grit, and, it goes almost without saying, Ramsay Campbell’s The Stillness, but in the end you’re left with the feeling that this is a collection that exists simply because it can. Maybe we’ve reached the point with themed tomes where it’s time for the bigger publishers to give others a chance while they themselves take a step back, have a think, and assemble something truly unique before further glutting the bookshelves of our Dark Cities. Mike Wild