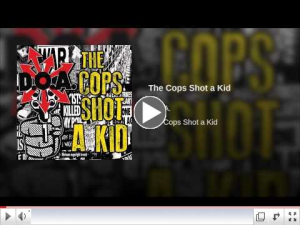 In reaction to the recent deaths of African Americans at the hands of police in Ferguson, Missouri, Baltimore, Maryland and New York City, D.O.A. one of the world’s most political bands has released a new single: “The Cops Shot a Kid (Gonna Be A Riot),” the first single from D.O.A.’s upcoming studio album “Hard Rain Falling” on Sudden Death Record. The single will be officially released on I Tunes Wednesday May 13th (HERE).

Joe Keithley, Canada’s punk godfather had this to say “I am outraged by the deaths of unarmed suspects at the hands of various police forces in the USA. Of course I realize that there are a lot of good cops that do a difficult job every day, but some of the recent killing sure looks like it’s rooted in racism. So I wrote this song about these injustices and the inevitable reaction that will likely follow from the folks in that neighborhood Police should be wearing body cams while on duty. Look at it this way if it weren’t for bystanders with cell phones, the public would be not seen what had happened and the truth could have been severely impeded.”

D.O.A. is still working on their new 12-song studio album “Hard Rain Falling” and their Kickstarter Campaign will be active until the end of the month.

The band started in 1978 and is known as Canada’s punk pioneers. Canada’s godfather of punk Joe Shithead Keithley originated the term ‘hardcore” back in 1980 and the band pushed the term into the common vernacular with their landmark album Hardcore 81.

“When I started writing songs for Hard Rain Falling I listened to our early stuff like Hardcore 81 and the Disco Sucks EP and I tried to take same direct to the point, wild and political approach,” says Keithley. “So it’s back to D.O.A.’s roots the way we are approaching this album.”

Keithley with the help of his notorious rhythm section, Paddy Duddy (drums) and Mike Hodsall (bass) will record an album that harks back to the basics of early punk. It will contain fast, short, frantic songs that dive deep into urgent issues of out time: racism, war, gangs, oil pipelines and environmental degradation.