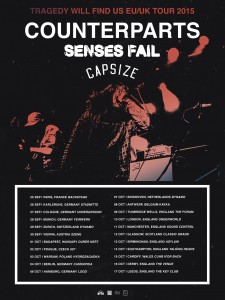 Canadian melodic-hardcore band Counterparts are excited to announce a headline tour this Autumn in support of their forth coming album ‘Tragedy Will Find Us’. The record, which finds the band at their most honest and revealing state yet, has a level of raw emotion is matched only by the band’s fierce, sonic assault.

This run if shows will see support from label mates Senses Fail, who release sixth studio album titled ‘Pull The Thorns From Your Heart’ later this month.

Pull The Thorns From Your Heart on 29TH June via Pure Noise Records. Watch the Video for “The Importance of the Moment of Death” now.