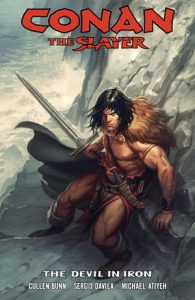 Conan. The boy who left his homeland in search of adventure and grew to adulthood becoming a warrior, freebooter, thief, sword for hire and king in waiting.  He was, is and always will be the yardstick against which every other fantasy hero is measured and the shadow that he still casts subsumes and overwhelms all who have followed in his literary footsteps. The barbarian whose noble savagery and code of honour forced learned men and women to question their own civilised beliefs, Conan has become the accepted mainstream “face” of Sword and Sorcery.  And that’s just fine and dandy with me; as having been a rabid fan of Robert E. Howard’s stories for nearly four decades I figure that if the “normals” are going to embrace a hero, then by Crom, the hero they should be clutching to their bosom should be Conan.

In The Devil in Iron, a tale of a cursed island, a cruel and capricious ancient god, collapsed civilisations, piracy, cannibalism, avarice, vengeance and the inevitable price that would be usurpers and tyrants eventually pay, Conan’s destiny is guided by Cullen Bunn. But while his hands may type the words that shape Conan’s fate, Robert E. Howard’s spirit bursts out of every paragraph and infuses every speech and character . This is Conan as his creator would have written him, filled with the sort of horrors and eldritch happenings that Howard’s friend and contemporary, HP Lovecraft later became famous for. Whatever it is that makes Conan – as his creator imagined him -special, Cullen Bunn gets it. He gets it so completely that it feels like you’re reading a lost Howard classic that’s been revived and retold in a medium that the barbarian is ideally suited to.  Aided in his story telling by the brutally brilliant, viciously detailed and gloriously pulp-tastic art of Sergio Devila, Michael Atiyeh, Admira Wijaya and Dheeraj Verma, Bunn has brought Howard’s vision of Conan back to life and returned him to his true and proper place. Sitting on the throne of, and ruling over, fantasy fiction. Let me tell you of the days of high adventure… Tim Cundle