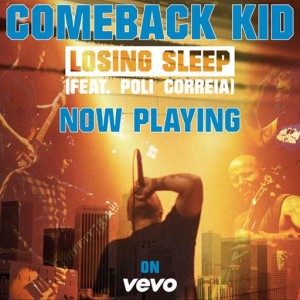 From deep inside the pit, COMEBACK KID come out swinging with ‘Losing Sleep’, the latest video from Die Knowing. Filmed live in concert all over the world, the full-contact video features studio footage with guest vocalist Poli Correia of Devil In Me, and erupts in your face showing what goes down at a COMEBACK KID show.

Watch the world premiere of ‘Losing Sleep’ on VEVO

“This video is a compilation of the last two years of our life and ‘Losing Sleep’ is one of the hardest hitting songs we’ve ever wrote”, tells lead vocalist Andrew Neufeld.

COMEBACK KID return to Mexico this week to deliver their stomping anthems for four rare shows, before jetting to Europe in April as part of the Impericon Festival with Bane.