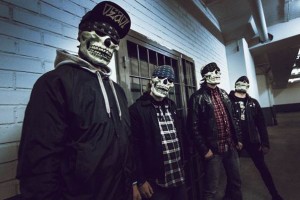 Sweden’s rising force in hardcore-driven thrash metal has managed to build up an excellent reputation with only two albums. The self-titled debut album (2011) and particularly their second album “Radioactive Intervention” (2012) have solidified DR. LIVING DEAD!‘s foundation as one of the most gripping, interesting and promising upcoming metal bands of the decade. Besides the high level of musicality, their extraordinary knack for hooks and recognizable melodies and the moshpit-infesting headbanger riffs, it’s most notably the outer appearance that separates DR. LIVING DEAD! from your average thrash metal band. And what could be more convincing than four skull-masked dudes from the north on a suicidal rampage?

“We are proud to welcome DR. LIVING DEAD! to the Century Media family. They bring back the excitement of late ’80s crossover shows – when crossover was still the unholy marriage of thrash metal and hardcore punk – and it was mandatory to get hurt in the moshpit. These deadly doctors from Sweden definitely know more about good friendly violent fun than spiritual healing and I’m glad we can help them to spread their disease. A special thanks to High Roller Records who discovered and supported the band in the first place!”

The band comments on the signing:
“The Doc is beyond honored to sign with Century Media, past and present home to many of our favorite bands. The energy within this partnership is building up to a nuclear meltdown, ready to tear down the walls of reality and break the barriers of room and time.or at least your fucking stereo. Get ready people!!! //TEAMxDEADx”

In February the band will team up with SUICIDAL ANGELS and ANGELUS APATRIDA. 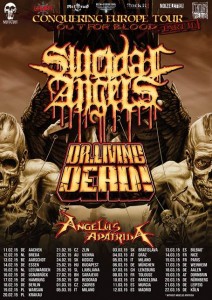