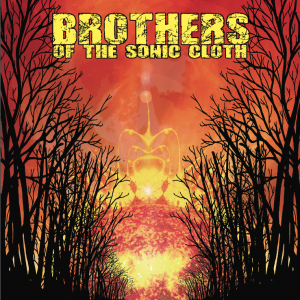 Keeping up a long-held tradition of bringing forth some of the heaviest music from the darkest depths of the Pacific North West, Seattle’s legendary Tad Doyle – formerly of TAD, and Hog Molly – delivers his strongest songwriting and playing to date with his latest manifestation, Brothers of the Sonic Cloth. Boasting a trio of musicians with Doyle on guitar/vocals, veteran bassists Peggy Doyle and drummer Dave French (The Anunnaki), Brothers of the Sonic Cloth will release their long-awaited, self-titled debut full-length February 16th, 2015 via Neurot Recordings.

Recorded at Robert Lang Studios and Tad Doyle’s own Witch Ape Studio in Seattle, Washington and mixed by Billy Anderson (Yob, Sleep, High On Fire, Melvins et al), Brothers Of The Sonic Cloth delivers five immense hymns, with two bonus tracks on the CD edition and fuses the collective and extensive rock histories and experience of its three members in the worlds of punk, hard rock and metal. The threesome’s sonic craftings is welcomingly unfamiliar, splicing serrated riffs through chilling post-punk drumming and hulking compositions that blow soulfully hot and desolately cold. Their longform pieces present the kind of mature ideas and expansive progressions that outpace the listener’s short-term memory leading them off the proverbial map; familiar landmarks like sludge, post-metal, rock all but disappeared over the horizon.

The record begins with an ominous eruption of riffs forged from deep within the earth, with “Lava,” and continues on this path throughout; a mammoth, relentless spirit on a timeless journey. Authentic and authoritative, this album is as much a persistent thudding body punch of sonic destructive force as it is a thoughtful statement of awareness and the inescapable raw condition of life.

Elaborates Doyle of the band’s creation: “After almost fifteen years without putting out a record, much time was spent woodshedding, riffing and writing new material. Brothers of the Sonic Cloth was originally a recording-only project and creative outlet for me playing all instruments on early unreleased demos but I quickly realised that I wanted the music to be played live so I would have to enlist other like-minded players. Peggy was an obvious choice with her enthusiasm and energy that made her an asset right from the start of integrating the band with other musicians. Dave French was a guy we both related to on a musical and deep spiritual level. We had played shows together with our respective bands, Peggy and I in Brothers of the Sonic Cloth and Dave who played bass in his band The Anunnaki. Dave completed the circle when he offered to play drums and his joining was this last piece that solidified the band. We are very honored and excited to have this release on Neurot Recordings whom with their legacy goes a fierce integrity that we are proud to be a part of.”

Further Brothers of the Sonic Cloth info, including additional teasers and track premieres to be announced in the weeks to come. Stay tuned.