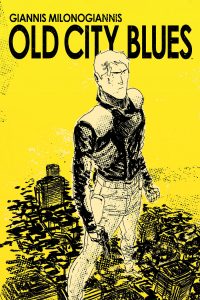 Hulu announced today that OLD CITY BLUES, based on the hit graphic novel series created by Giannis Milonogiannis (Prophet, G.I. Joe) for BOOM! Studios’ Archaia imprint, is in development as a Hulu Original Series in partnership with Brad Weston’s Makeready TV Studio. Kerry Washington (Scandal) is attached to star and executive produce the series, and Gore Verbinski (Pirates of The Caribbean, Rango) is attached to direct and executive produce the series. Arash Amel (The Titan, creator of the Archaia graphic novel Butterfly) wrote the pilot and is attached to EP the series. Brad Weston and Scott Nemes are attached to EP for Makeready. Ross Richie (Founder & CEO) and Stephen Christy (President, Development) will serve as executive producers on the series for BOOM! Studios.

Set in the near future, the graphic novel series follows the men and women of the New Athens police force. Built in the aftermath of a disastrous flood on the ruins of the country once known as Greece, New Athens is a new independent city created and wholly owned by technology giant Hayashi Corporation. When the cybernetically augmented founder of Hayashi is found murdered, it seems to be just another case of cyborg persecution. But Hayashi Corporation’s strange response to the incident raises the suspicions of lead detective and the Special Police. The mystery they unravel will leads them straight into the wasteland of the Old City.

OLD CITY BLUES joins BOOM! Studios’ diverse array of projects in development for film, including Mouse Guard at Fox with Wes Ball (The Maze Runner trilogy) set to direct with Matt Reeves (The Batman) producing; Goldie Vance at Fox with Rashida Jones (Angie Tribeca) to adapt and direct with Kerry Washington (Scandal) producing; Imagine Agents at Fox with Richie Keen directing and Shawn Levy (Stranger Things) producing; Irredeemable at Fox with Adam McKay (The Big Short) producing and directing, the 2018 Eisner Award-nominated Bolivar at Fox with Shawn Levy producing; and groundbreaking worldwide YA phenomenonLumberjanes at Fox. For television, BOOM! Studios has multiple series in development including the GLAAD Media Award-winning The Woods at Syfy with Brad Peyton (San Andreas) set to direct and executive produce the pilot.