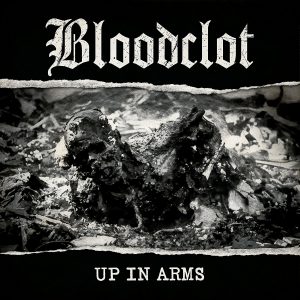 It was never going to be easy for anyone who was a part of The Age of Quarrel era Cro Mags to plough their individual furrow and go their own way after being a part of a band, and playing on a record, that helped to forever shape and define what is, arguably, one of the most famous musical movements in the world, New York Hardcore. Try as they might, none of the members of the Cro Mags, whether they were using the band’s name or another moniker, has even come close to capturing the spirit, energy, intensity and fury of that debut album. Until now. Bloodclot, the band formed by John Joseph and featuring fellow NYHC alumni Todd Youth  on guitar and a rhythm section comprised of Nick Oliveri and Joey Castilo, to pursue that goal and live up to that legacy have just achieved the seemingly impossible. Up In Arms is the record that the Cro Mags should have written, recorded and released in ’88 instead of Best Wishes. It is a raging Hardcore monster that’s equal parts the Bad Brains and the Cro Mags, full of instantly memorable, sing-a-long slam dancing and stage diving anthems that’ll make your heart beat a little faster and the blood pound a little harder in your head every single time you listen to it. This is the records that every Cro Mag’s fan and the worldwide Hardcore family has wanted, and been waiting, to hear for the last thirty years. This is Hardcore…  Tim Cundle