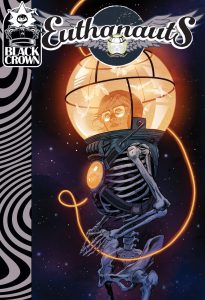 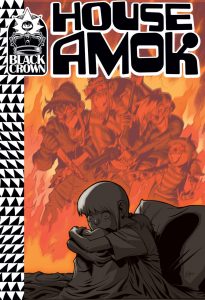 The Ruling Class of creator-driven titles continues its reign this summer as Shelly Bond’s band of miscreants continues to grow in numbers and talent. The Editor of Black Crown has set her sights on the imprint’s next two series and they are as original as the first wave of titles currently out in the wild.

Writer Tini Howard is taking no prisoners with her current run on ASSASSINISTAS (with artist Gilbert Hernandez) and will be diving into the great beyond with EUTHANAUTS, her second Black Crown title. She’ll be joined by artist Nick Robles (Alien Bounty Hunter) to answer the ultimate question: What happens to us after we die?

Two women aim to find out in this series which combines classically intrepid explorers with our anxieties about death and the beyond — with psychonautic mindspaces to match. The first arc will kick off this July.

“Euthanauts is a book about death and dying as a universal concept,” said Howard. “How do these ideas contribute to our relationship with a deathspace we haven’t yet discovered, and what’s behind the light at the end of the tunnel?”

“I keep telling friends that I feel like I found a creative home with EUTHANAUTS,” adds Robles. “I’m inspired and excited to see where Tini takes us.”

As if that weren’t enough to entice you, we dare invite you to enter HOUSE AMOK. From the creative powerhouse team of Christopher Sebela (Hard Crimes) and Shawn McManus (The Sandman: Game of You), this 5-issue miniseries is equal parts bloody reality, dark conspiracy, and magical fantasy. Delve into a character-driven study of a damaged nuclear family as we follow twin sisters in a claustrophobic, high-speed American road trip from Portland to the east coast.

“Horror was always my first true love affair with stories,” said Sebela. “Getting to team up with people like Shawn, Shelly, Lee, and Aditya to do a dark, creepy story like HOUSE AMOK — full of all the things that put me on edge and keep me up at night — is everything I could’ve hoped for when I was being terrified by stories like this when I was a kid.”

Adds McManus, “I haven’t had this much fun drawing comics since Fables.”

“A year ago, we announced BLACK CROWN at Emerald City Comic Con,” editor Shelly Bond said.  “It’s the perfect venue to debut our newest titles. EUTHANAUTS and HOUSE AMOK share the dysfunctional irreverence you’ve come to expect from the cross street of comics and chaos.  We’ve saved you the best table at the Black Crown Pub, and your favorite song is on the jukebox. 2018 is just getting started! Viva Comics!”