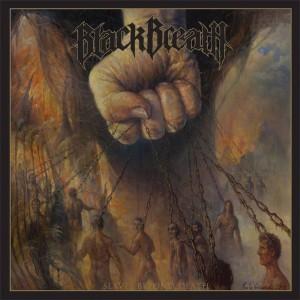 Black Breath – Slaves Beyond Death CD (Southern Lord)
After a lengthy absence (caused in part by drummer Jamie Byrum’s recovery from multiple injuries resulting from a car accident – welcome back Jamie!), my favourite Seattle band return with their third full length album, and thankfully the intervening period has done nothing to dilute the bands style of Accused style Hardcore fused with Swedish influenced Death Metal ala Nihilist/Entombed. 8 tracks of double bass drum fuelled grinding guitars with Neil McAdams acid gargling vocals. It’s impossible to pick out a standout track when all 8 are of superlative quality for this style of music; however the aptly named ‘Reaping Flesh’ and ‘Arc of Violence’ should plug a hole in the gap left by Floridian legends Death when it comes to intense, slasher-movie-soundtrack, riffarama, and there’s a surprise twist in the tail with closing track ‘Chains of the Afterlife’ seeing the band enter Metallica instrumental territory (circa ‘Ride The Lightning’/’And Justice For All’). A splendid end to a stupendous album. Ian Pickens