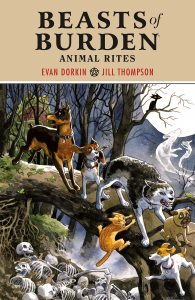 Something Whiskered This Way Comes. A chapter title prompting a proper guffaw halfway through a book that already has me smiling consistently. It ain’t often that happens, believe me. But Beasts Of Burden: Animal Rites gets you like that, writer Evan Dorkin and artist Jill Thompson managing also to occasionally tug at the heartstrings or have you nod knowingly and affectionately in the way only someone who has known the pleasure, and sometimes pain, of pets can do.

What we have here is in very many ways a love-letter to pets, and to dogs in particular. It’s just that these particular dogs happen to be, well, a sort of canine Ghostbusters. Instead of Venkman, Stantz, Spengler and Zeddmore, allow me to introduce you to Pugsley, Rex, Ace, Jack, Whitey, and Orphan. Orphan’s a cat, but don’t let that confuse you, because these guys are a team. Or at least that’s what they become over the series of early shorts and then 4-part collected comic herein. They have their teething troubles – “stop sniffing me ass, I’m trying to work here” – but encounters with a haunted kennel, a giant frog demon and an army of witches’ familiars soon sees them knocked into shape. So much so that they find themselves promoted by their wiser elders into official ‘Watchdogs’ where thereafter they face their most dangerous supernatural manifestations yet.

I’ll be honest – I actually preferred the earlier shorts (more vignettes) to the later four parter, but only because I didn’t particularly take to the Big Bads and their particular brand of mischief. Don’t let it worry you: Dorkin’s writing remains enchanting and Thompson’s artwork delightful throughout, the latter providing three or four panels (and one splash) that are genuinely and deeply moving. The series has won no fewer than eight Eisner Awards, apparently, and I’m not at all surprised – this is genuine originality at work. 4.5 out of 5 stars so treat yourself. It’s even better than a Scooby Snack. Mike Wild