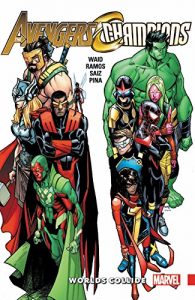 The only thing that could ever bring the superhero old guard and the crusading new kids on the block together would be if the future of Earth and the human race was entirely dependent on them being able to work in communion and as an extended and combined team.  Which is exactly what happens in Words Collide, forcing the grown-ups and the kids to talk to, and see, each other as people instead of as the young whippersnappers who never listen and the set in their ways and never wrong old timers they view each other as being. When the High Evolutionary sets Counter Earth on a collision course with it’s equal, but opposite, celestial body, the mutual distrust and dislike that the Champions and the Avengers have for each other is set aside as they’re compelled to fight, tooth and nail, for everything that they know and love. And in what will inevitably come to be known by both teams as one of the hardest battles of their careers, they come to know the true meaning of loss when one of their number falls at the final hurdle while making the ultimate sacrifice for their team mates and the billions of souls that they’re sworn to protect.

First things first Worlds Collide looks gorgeous. Every panel and every page is dripping with immaculately rendered, magnificent detail and sends shivers of excitement coursing up and down your spine. The quartet of genii responsible, Saiz, Ramos, Pina and Diaz should be praised from on high and have their names whispered in reverential tones because World Collide doesn’t just look good, it looks incredible. Then there’s the author of this adventure, Mark Waid. Okay, so you all know that I’m a Waid fanboy and will pretty much read anything that has his name on the cover, but this time he’s excelled himself. Questioning what it means to be human and to be alive, the possibility of existence after death and exploring love, loss, camaraderie and the social norms that exist regarding mainstream ideas about the relationships that exist between age, maturity and wisdom, Worlds Collide is brimming and bustling with subtext and rich, vibrant characterisation and dialogue. And it’s also a pretty good superhero story. Avengers and Champions… Assemble! Tim Cundle