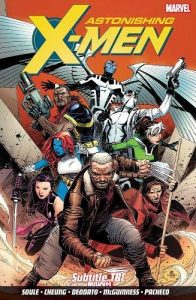 Despite having been weaned on the Chris Claremont/ Dave Cockrum run of the Uncanny X Men, I have to admit it’s been a fair few years since I’ve spent any serious time with The Children Of The Atom. The mutant books have always been the fanboy equivalent of a soap opera, more so than any of the other Marvel titles. The enormous cast is constantly revolving the storylines sprawling and multi layered, the relationships deep and complicated. Life, love regret in abundance.  So dipping a toe into a book with such a convoluted history can be overwhelming for a casual visitor.

Life of X collects Astonishing X- Men issues 1-6 and finds the scattered X Men drawn to a psychic cataclysm unfolding in the middle of modern London by Betsy Braddock.  With an ancient evil attacking the world’s most powerful minds Bishop, Gambit, Fantomex, Logan, Beast Archangel and Rogue must fight a battle on two fronts to discover the truth of what is behind the psychic onslaught.

Whilst Warren Worthington and Bishop struggle to protect the physical forms of their team mates, the rest of the squad enter the astral realm to confront the Shadow King in his own mind bending domain. Farouk has always been one of the most insidious villains in the muties rogues gallery and writer Charles Soule plumbs twisted depths in his take on the character. With the odds stacked against them and an enemy more powerful than he’s ever been before the X-men have to dig deep and put aside their differences to beat Farouk at his own game.

Typically there’s a lot going on here. It’s never a straight forward fight with these characters and that’s what makes their stories so rich and compelling in the right hands. Soule rises to the challenge and seasons his tale with allegory and  inner struggles, old flames and shattered trust and I’m reminded of exactly why I loved these characters so much as a youngster.  There’s an emotional depth to the writing that makes these most maligned muties seem like real people with genuine struggles and not just super powered stereotypes. Jim Cheung, Mike Deodato, Ed Mcguiness, Carlos Pacheco, Ramon Rosanas and Mike Del Mundo all deliver in the arts and inks department and despite the different penciling styles from issue to issue the story never suffers or feels disjointed.

An excellent slice of mutant mania that left me hungry for more new material and keen to break open the long forgotten boxes in my attic and revisit the archives! Nathan Bean