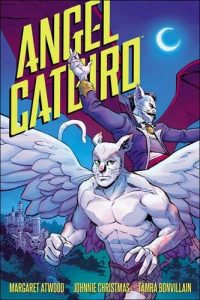 It’s time to return to Margaret Atwood’s hidden history of the world, the half-species that walk unseen among us and the pursuit of an unwitting genetic scientist who has accidentally been subsumed in this cloaked and clouded microcosm, by an unscrupulous and narcissistic mad scientist. With their club destroyed by the unconscionable Professor Muroid (the evil genius hell-bent on fulfilling his ambition of global rodent domination) the half-cats (a secretive species of humans who can transform into cats, and cats who can change into people, at will) led by Angel Catbird (or Strig Feleedus as he’s more commonly known), Cate and Ray begin their retreat to Castle Catula, the home of their erstwhile cat, bat and vampire hybrid companion, Cat Catula. It’s a journey that’s fraught with danger as Muroid seeks to curtail their progress and stop them, filled with companionship as the heroes learn more about each other, strengthen the bonds that unite them and recruit new allies to their cause and one that ultimately ends in battle and a good old fashioned cliff-hanger as the hunter unleashes his secret weapon on his prey.

Steeped in pulp nostalgia, thanks to Margaret Atwood’s forthright, rapid fire storytelling that’s infused with vivid characterisation, warm humour and a winsome and magnetic plot, Johnnie Christmas’ gorgeously detailed pencils and Tamra Bonvillians vibrant, yet period centric colours, To Castle Catula propels the ongoing Angel Catbird saga forward in brisk, no-nonsense, fun filled fashion.  Proudly wearing its influences on its paws, namely Mary Tourtel and Alfred Bestall’s Rupert the Bear, L. Frank Baum’s Oz stories and the pulse quickening adventures of the Golden Age of Comics, To Castle Catula is a wonderfully modern throwback to the age of Saturday morning chapter plays and newsstand magazines that thrived on a diet of weird and curious fiction. Believing in, and succeeding because of, an equal mixture of style and substance, Angel Catbird is one of the most unique, original and delightful series of the last half decade and holds firm to P.T. Barnum’s golden rule. Always leave them wanting more…  Tim Cundle